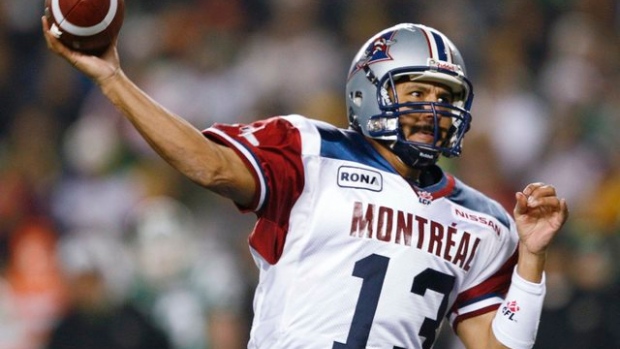 The roster is led by quarterback Anthony Calvillo, who is not just the CFL’s all-time passing leader (79,816 yards) but is the leader across all of professional football as well, along with his teammate that he routinely handed the ball off to over several seasons, running back Mike Pringle, the CFL’s all-time leading rusher (16,425 yards). The offensive tandem helped the Alouettes win the 2002 Grey Cup ⁠— which, at the time, was the team’s first since 1977 ⁠— and Calvillo ultimately went on to guide the Als to their two most recent championships as well in 2009 and ’10.

Along with Calvillo and Pringle, two other Alouettes who began their careers with the team in the late ‘90s and played into the 2000s appear on the list, in receiver Ben Cahoon, Montreal’s leading receiver in all of the major categories, and offensive lineman Scott Flory, a nine-time CFL all-star and two-time Most Outstanding Lineman winner.

Two players who both started in Montreal in 2006 and were part of the groups that helped the franchise win back-to-back Grep Cups in 2009 and ‘10 ⁠— defensive lineman John Bowman and linebacker Chip Cox⁠ — made the list. Bowman is Montreal’s all-time leader in sacks (134), while Cox holds several team tackling records.

Bowman is one of two active Alouettes to make the list, with two-time CFL all-star linebacker Henoc Muamba being the other.

Pro Football Hall of Famer Marv Levy — who led the Alouettes to two Grey Cup wins and three overall appearances in his five seasons with the club — was named the team’s head coach.

Sam Etcheverry — who was the first quarterback in pro football history to pass for 4,000 yards in a season when he accomplished the feat in 1956 — along with receiver Red O'Quinn , Johnny Rodgers and o-lineman Herb Trawick were named the team's foundational players.