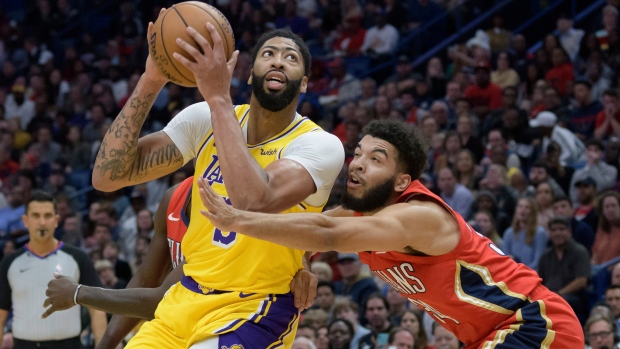 NEW ORLEANS — Anthony Davis shrugged off a constant cascade of boos and reminded a packed crowd exactly what it lost when the six-time All-Star’s trade request was finally fulfilled.

Davis capped a 41-point performance in his return to New Orleans by intercepting Jrue Holiday’s inbounds pass with 5 seconds left and making a pair of game-sealing free throws, and the Los Angeles Lakers extended their winning streak to nine with a 114-110 victory over the Pelicans on Wednesday night.

“Obviously, the emotions was high,” Davis said. “I think this game was circled on both calendars. And they came out guns blazing and we were able to come out with the win.”

An energetic crowd booed Davis during introductions and virtually every time he handled the ball, only to see him and new teammate LeBron James take over in the fourth quarter.

James had 29 points and 11 assists, scoring 15 points in the final period, when Kyle Kuzma added nine of his 16 points to help the Lakers erase a 10-point deficit.

“My teammates kept telling me, ‘AD, don’t worry about it. We’re going to get this win. We’ll find a way to win it for you,’” said Davis, who spent his first seven years in New Orleans.

New Orleans trimmed it to 111-110 when Josh Hart hit one of two free throws, and after a turnover by James as he was swarmed in the paint, JJ Redick’s open 3 for the lead rimmed out. The Pelicans were forced to foul Davis, who missed one of two free throws, giving the Pelicans 5 seconds to run a play for the tie or lead. But that’s when Davis sealed it, stepping in front of Brandon Ingram for his third steal.

Holiday had 29 points and 12 assists, and Ingram had 23 points and 10 rebounds for the Pelicans, who have lost three straight.

“It was a great atmosphere. I thought the energy was our way,” Holiday said. “Toward the end of the game we had some execution issues, but we still gave ourselves a chance.”

After trailing by 16 in the third quarter, the Lakers seized momentum with a 9-0 run to open the fourth, trimming New Orleans’ lead to 89-88. Los Angeles tied the game at 91 on Kuzma’s third 3.

New Orleans briefly went back up by four before Davis, who’d received treatment after banging his right elbow at the end of the third quarter, returned to the game and threw down an alley-oop feed from James.

“Any time you go back to a place where you’ve made a mark, where you started your career ... and gave a lot to the community and the franchise, you want to come back and play well and win,” James said. “We knew that as his brothers and we wanted to try and fulfil that goal.”

The Lakers took their first lead since the opening five minutes of the game when James hit a jumper over Ingram, pulling up as the Pelicans forward glanced over his shoulder to see if a screen was being set.

“It’s just winning time for me,” James said. “Fourth quarter, no matter how much of a deficit we’re in, or however the game is going, I believe once I start the fourth I can make a push and see what happens.”

Davis missed his first shot and three of his first four to the delight of the crowd, but still scored 27 points by halftime on his way to the most points by a player in his first game against his former team, according to Elias.

“It was a tough environment. Every time he touched the basketball, he was going against a guy — a bunch of guys — that know him, playing against a coach that knows him,” Lakers coach Frank Vogel said. “He put all that stuff aside. Blocked out the noise and rose to the challenge.”

Davis executed about every move New Orleans fans knew and loved when he wore the No. 23 in blue, red and gold, from soaring alley-oop dunks to turnaround baseline fades. Only this time, he wore a gold jersey with a purple No. 3, and it was his misses that drew roars from the crowd.

The Pelicans appeared buoyed by the partisan energy permeating the arena, going up 38-25 on Holiday’s step-back 3 as the first quarter expired.

New Orleans led 64-54 at halftime, thanks in large part to Holiday’s 10-of-15 shooting to that point, including his 4-of-4 mark from 3-point range. And the Pelicans maintained a double-digit lead until early in the fourth quarter.

Before Davis changed out of his uniform, he went to the Pelicans locker room to give Holiday a signed jersey and wound up lingering a bit to catch up with old teammates and coaches.

“We’ve got a bond off the floor that will continue no matter the circumstances. It was a fun night,” Davis said. “Everybody thinks I’ve got a vendetta against New Orleans or something like that. ... I have no ill will toward anybody. I’m in a happy place. They’re in a happy place. And we’re just here to play basketball.”

Lakers: Begin a two-game homestand against Washington on Friday night.

Pelicans: Visit Oklahoma City on Friday night in the first of a home-and-home with the Thunder, with the second leg on Sunday.