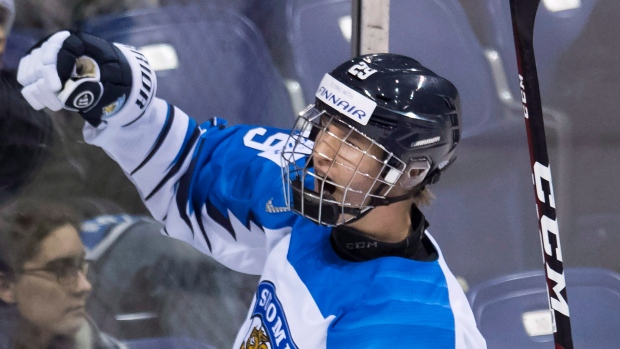 Anton Lundell came in No. 12 on TSN Hockey Insider Bob McKenzie's final list of top prospects. TSN director of scouting Craig Button had the HIFK centre at No. 16 in his latest rankings.

But Lundell believes he'll be picked higher than both those projections whenever the National Hockey League gets around to holding its 2020 draft.

Whatever the number ends up being, Lundell will almost certainly be the top Finnish player selected.

"It’s a big honour to be the first guy from Finland," he said. "I have shown to everyone I can play good against men in Finland and also against [players] my own age around the world in international tournaments, so I have a good feeling for the draft."

Lundell, who produced 28 points in 44 games this season, may lack some of the offensive sparkle of other top prospects this year, but he’s more than held his own while suiting up in Finland's top professional league. Lundell believes his well-rounded nature is what helps set him apart from other prospects.

"I want to be a trusted guy," he said. "I can produce offence and, at the same time, play a really good two-way game. I can play really good on the power play and penalty kill as well."

And Lundell, who stands 6-foot-1 and 185 pounds, believes he'll be ready to do that in the NHL sooner than later.

"In the beginning it was hard," he admits when asked about the challenge against older competition, "but I got more and more comfortable. Maybe one more year here in Finland and then I'll be ready. Of course, you never know what happens, but there are only good options in front of me for next season."

After holding his own against men in the top 🇫🇮 league for the last two seasons, Anton Lundell expects to be a top 10 draft pick...

Lundell, who compares his style to Aleksander Barkov, suggests he may need another year in the Liiga before the NHL: https://t.co/0wFDQs80P8 pic.twitter.com/nRJraQAv8N

TSN spoke to Lundell via Zoom this week from his family's summer home in Finland. The 18-year-old expressed admiration for Florida centre and fellow Finn Aleksander Barkov and reflected on his gold medal win at the 2019 World Juniors in Vancouver.

What's the best part of your game?

"My hockey IQ. I can read the game very well and I know where to be and when and, of course, I find my linemates with good passes. So, that's the biggest thing in my game."

Is it because your dad played? Why is your hockey IQ so high?

Craig Button compares your game style to Montreal Canadiens centre Phillip Danault. Who do you consider to be your NHL role model?

"I have always liked Aleksander Barkov. When he played here in Finland I was watching him a lot and I think we have some of the same things in our games. I like his style."

“A workman-like, two-way player who is a lynchpin for centre ice play in all zones and all areas of the game...

How much did the elbow injury in November impact your season?

"It was a hard time. I was away from games for seven weeks, but I recovered good and it made me stronger. I did really good after the injury, getting back to games, and it felt like I was even better after the injury."

Because you were stronger physically?

"Yeah, a little bit, but my whole game, it felt like I had more energy and was more ready."

Young centres often struggle with faceoffs, but you won 53.5 per cent of your draws this season. What's the key to that success?

"It's always been something that I've wanted to be good at. When you get the puck you can play with it the right way, so it's important to get the pucks. It's something I work a lot on in the practice and after practice. You have to be ready and strong with the stick."

Your father Jan was a goalie. Why did you choose to play forward?

"It was more fun to score goals."

HIFK center Anton Lundell opened the scoring in today’s match against KooKoo. He’s the leading draft-eligible prospect from Finland and is expected to go in the top half of the first round of the 2020 NHL Draft. He now has…

Do you have a favourite memory of growing up around rinks with your father?

"Yeah, 2011 when he won the Finnish gold with HIFK, my team now, and the team I grew up watching. It was a special moment, winning gold in Helsinki. I was too young to be there all the time, but after the final game I was there."

Your dad is the goalie coach for HIFK now, what's it like having him working alongside you?

"It's different, but it's really fun to have him there and he’s been a big help with my career. He’s helped me so much."

Does he help you understand how to read goalies?

"We’ve talked a lot about how goalies play, and I'm really interested to know how the goalie reacts in the net."

Your dad actually suited up in a game this season, becoming the oldest player in league history. How did that happen?

"One goalie got sick just before the game and we did not have any time to ask our younger [junior team] goalie or anyone else, so he had to put the gear on as the second goalie. Then, when we had a good lead, the coach wanted to give him the last minute. It was a special day and really fun to remember."

Were you hoping it would happen? What were you thinking?

"I didn't think about it before the game, but then during the game when I saw the scoreboard I was thinking that maybe it could happen and when it happened it was fun to be on the ice. The win and celebration was something I remember."

Was your dad nervous?

"I think he was a little bit nervous, because he hasn't been on the ice much in the last six years."

You were the youngest player on Finland's World Junior team in 2019, but still played an important role in Vancouver. What did you do well on the big stage?

"I just played my own game. I didn't try to be anyone else. I played to my strengths and it was a fun tournament. We had a good line [with Eeli Tolvanen and Kaapo Kakko] and a really good team as well. We had some tough games, but we did win it in the end. It's something I'll never forget."

What was it like beating Canada in overtime in the quarterfinals?

"It was crazy. Like, 18,000 red jerseys screaming the whole game and then when we scored it all went quiet. Nobody said anything."

You picked up an assist on Kakko's winning goal late in the third period of the gold-medal game. What do you remember?

"Well, there were one or two minutes left. We won the faceoff and our D put the puck in front of the net and then it went to Kakko and he scored. It's a fond memory."

#WJC: There it is -- Kaapo Kakko pots what turns into the golden goal as Finland beats Team USA 3-2 to win WJC gold. What a tournament.

Congrats to Finland. They really were the beast team. pic.twitter.com/CqfIDNw1fw

Where do you keep your gold medal?

"It's home in Espoo. It's in a special place in my room."

Do you look at it for inspiration and motivation?

"Not that much. You can see it, but I'm not looking that much."

Because there's more to do?