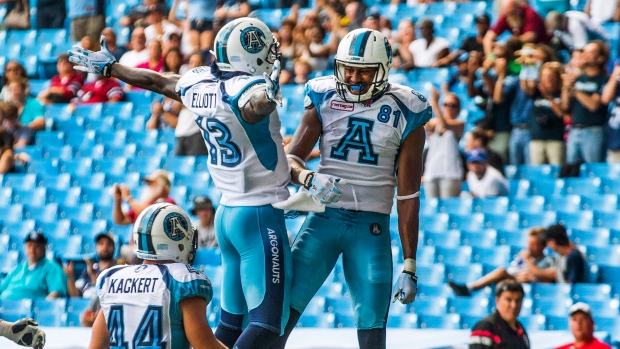 After the contest, Milanovich questioned the commitment level of his players and said changes could be coming.

"Obviously these decisions are very difficult to make, but I believe they are in the best interest of this football team," Milanovich said in a statement. "We remain committed to winning this year and making a final push for the playoffs."

Toronto (5-9) stands third in the East Division standings, two points ahead of Montreal (4-9). Not only do the Argos face the league-leading Calgary Stampeders (12-1-1) at BMO Field on Monday but trail the Edmonton Eskimos (7-7) in the CFL standings.

Edmonton is currently fourth in the West Division. If the fourth-place finisher in one division has more points than the third-place team in the other, the No. 4 squad crosses over to take the No. 3 playoff seed in the other conference.

The moves are stunning as Hazelton, Elliott and Gurley all were starters — when healthy — on Toronto's offence. The six-foot-three, 213-pound Hazelton was Toronto's receiving leader last year with 70 catches for 803 yards and six TDs while being named the East Division's top rookie.

Elliott, 27, was also in his second season with Toronto, registering 23 catches for 294 yards and two TDs. The six-foot-three, 213-pound receiver recorded 50 receptions for 642 yards and eight TDs in 2015.

The six-foot-two, 220-pound Bates had just three catches for 20 yards and a TD this year. He appeared in five games in 2015, registering six receptions for 123 yards and a touchdown.