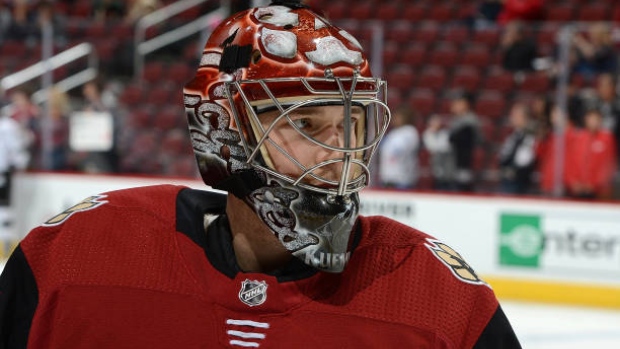 Arizona goalie Darcy Kuemper left the Coyotes game against Minnesota in a great deal of pain late in the third period on Thursday night.

Down 7-5 to the Wild with about three minutes left, Kuemper stretched to make a save and went down immediately. He was down for several moments before being helped to the bench. He slammed his blocker down to the ice in frustration, then limped down the tunnel to the dressing room.

The team did not have an update on Kuemper after the game, telling reporters they would speak to the team doctor for more information.

Kuemper has had an excellent season for the resurgent Coyotes. He was 15-7-2 coming into Thursday's game with a .935 save percentage and a 1.97 GAA. He was one of the big reasons Arizona began the night in first place in the Pacific Division.

Antti Raanta came in to replace Kuemper for the final minutes of the game. Minnesota scored into an empty net to win 8-5.