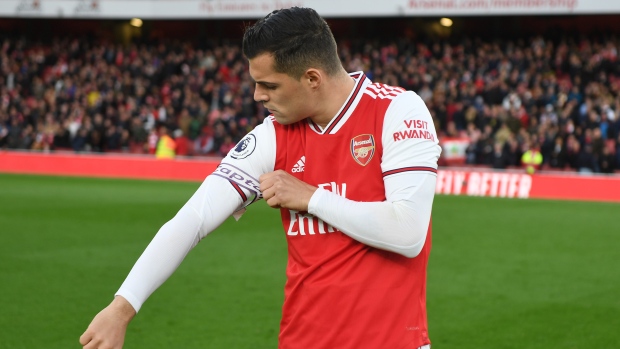 Gunners manager Unai Emery confirmed on Monday that the Switzerland midfielder had been stripped of the armband and striker Pierre-Emerick Aubameyang would assume the role.

The 27-year-old Xhaka took over the captaincy this season following the departure of Laurent Koscielny, but his role was reconsidered following an outburst towards the fans during 2-2 September draw with Crystal Palace last month. Upon being substituted in the second half, Xhaka swore and gestured towards Arsenal supporters, removed his shirt and headed straight into the tunnel.

While Xhaka released a statement explaining his actions and saying that he acted out of frustration from the abuse he was receiving from supporters, he was left out of last Saturday's draw with 1-1 Wolves. Aubameyang captained the side and scored the Gunners' lone goal.

A Gabon international, the 30-year-old Aubameyang is in his third season at the Emirates, coming over in a £56 million transfer from Borussia Dortmund.

In 76 appearances for the Gunners across all competitions, Aubameyang has scored 50 goals.