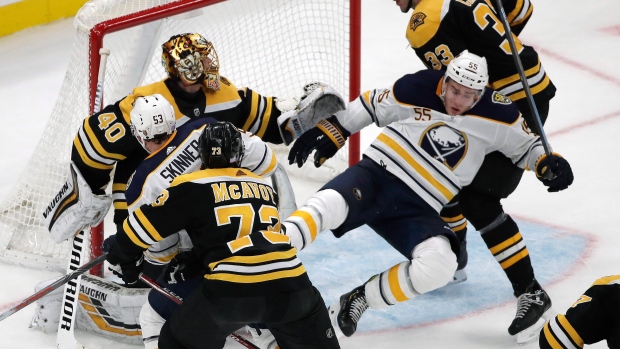 Rasmus Ristolainen falls in front of Rask , The Canadian Press

Buffalo Sabres general manager Jason Botterill stated earlier this week that he was  “actively looking” for forward help to spark his slumping team, but according to TSN Hockey Insider Darren Dreger, it's not easy to manoeuvre in the trade market at the moment.

"It's a moving target," Dreger said on Insider Trading Thursday. "Jason Botterill, the general manager of the Buffalo Sabres, has, in fact, made offers on forwards but the system is gummed up a little bit – the financial system of the National Hockey League. There are so many teams, 10-plus teams, who are working with LTIR players and that can get very, very problematic.

"There are some out there that believe that Botterill is feeling a sense of urgency and he'd like to make at least one, maybe even two, trades in the next week to two weeks. But he's got to find the right fit and the right match."

The Sabres lost their third straight game on Thursday, falling 3-2 to the Bruins and are now 1-7-1 in the month of November. However, Sabres head coach Ralph Krueger said after Thursday's loss he believed his team deserved a better result.

"It's really painful right now," Krueger said, "to digest a game where, in Boston, against for me the best team in the league at the moment, we played as good a first period as we could play, and dominated in every, every area of the game except for the score. You know coming in out of that period 1-1, the guys deserved more from that, and I thought they stuck with it and never gave up and kept playing well.

"Boston raised their game a touch, but we still dominated."

Buffalo has been outscored 11-4 over their past three games and has dropped to 10-9-3 on the season after losing just two games in regulation through the first month of the season.