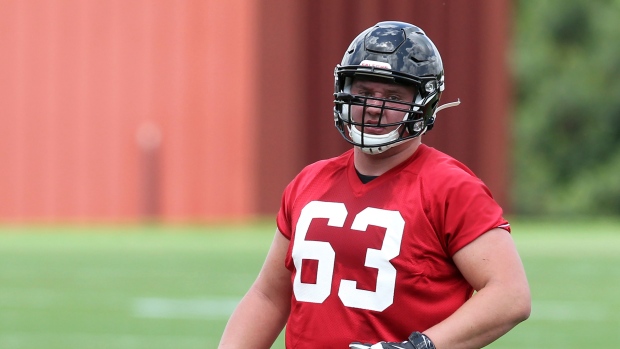 FLOWERY BRANCH, Ga. — Falcons rookie guard Chris Lindstrom, the NFL’s No. 14 overall draft pick, is back on the field for the first time since suffering a broken left foot in the season opener.

Coach Dan Quinn said Lindstrom could take some snaps Sunday against Carolina, but added the team won’t know until later this week when he will be medically cleared to rejoin the 53-man roster. Atlanta (3-9) has lost two straight and is out of playoff contention as it prepares to host the Panthers (5-7).

“It wouldn’t be the whole lot at one time, but if he hits all the markers, that would be something we would consider but not in the extended version, so to speak,” Quinn said. “I’m not going to call it a pitch count, but something along those lines.”

The Falcons made three moves on Monday, activating punter Matt Bosher from injured reserve, signing offensive lineman John Wetzel to the active roster, and designating Lindstrom for return to practice. Ryan Allen, who filled in during the last four games of Bosher’s absence, was released Friday.

Quinn said star receiver Julio Jones is “certainly close and back to feeling closer to himself this week” after missing the Saints game with a shoulder injury. Jones did not practice.

The return of Lindstrom, who underwent surgery in September and has a 21-day window to rejoin the roster, would help an offensive line that’s coming off one of its worst performances this year. Quarterback Matt Ryan was sacked nine times in the eight-point loss to New Orleans, tying a career high set in the 2013 finale against Carolina, and sustained 13 hits. His 38 sacks rank fourth in the league.

Quinn said it’s too early to tell if left guard James Carpenter will be able to play after leaving the Saints game with a concussion. Tackles Jake Matthews and Kaleb McGary each allowed two sacks. Brown and running back Devonta Freeman each gave up one. Three of Ryan’s sacks were caused by tight coverage.

If Carpenter and Lindstrom can’t play, Wes Schweitzer and Jamon Brown will start.

Quinn said Younghoe Koo will handle kickoffs even though Bosher is back. Bosher has been Atlanta’s kickoff specialist for the last nine years, but the Falcons want to limit further chance of injury.

The team’s top two tight ends, Austin Hooper and Luke Stocker, both returned to practice for the first time since getting hurt. Hooper has missed three straight games with a knee injury. Stocker missed one game with a back injury.

Quinn, whose job security has been subject to speculation for most of the season, insisted that the team isn’t feeling sorry for itself with no chance of making the playoffs.

“I recognize the question, and somebody asked one time, ‘What is there to play for?’” Quinn said. “Like, I’ve never understood that question. We’re ball players. We go to compete and battle for it and see how good we can get. These guys all love football, love competing and playing with one another, so yeah, that goes with the territory of not doing well, but in terms of morale and preparation, we’re going to put it in. No doubt about that.”