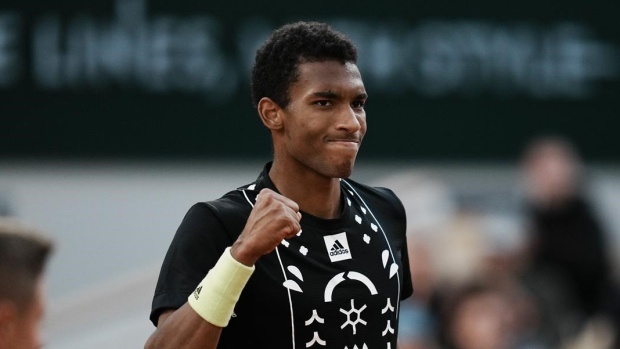 Canada's Felix Auger-Aliassime advanced to the quarterfinals of the Libema Open tennis tournament with a 7-6 (2), 7-6 (5) win over Tallon Griekspoor of the Netherlands on Thursday.

The Montreal native fired 13 aces and saved both break points he faced.

Auger-Aliassime never had a chance to break Griekspoor, but he dominated the first-set tiebreak and won on hos first set point with Griekspoor serving.

Auger-Aliassime led the second tiebreak 6-3 before Griekspoor made it close by winning two points on serve. That game Auger-Aliassime the opportunity to serve for the match, and he converted the match point.

The Canadian, ranked ninth in the world, is seeded second at the grass-court event held outside the Dutch city of s'Hertogenbosch. He will next face Russia's Karen Khachanov.

In other results Thursday, fourth seed Denis Shapovalov of Richmond Hill, Ont., was upset 7-6 (6), 7-6 (4) by Germany's Oscar Otte in the second round of the Boss Open in Stuttgart, Germany.

This report by The Canadian Press was first published June 9, 2022.