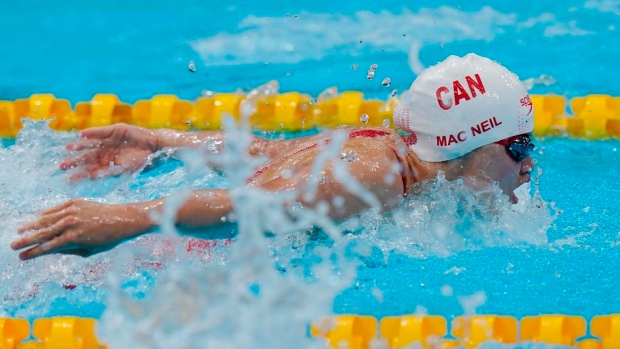 Swimming Canada Monday announced the 31-athlete team that will compete in Birmingham, England, from July 28 to Aug. 8.

The fully integrated team includes eight Para swimmers. Joining Rivard, who has a bronze medal in the 200-metre relay from the 2014 Commonwealth Games in Glasgow, will be Philippe Vachon, a medallist at the 2018 Games in Gold Coast, Australia, and two-time Paralympic medallist Nicolas-Guy Turbide.

"It’s always a privilege to train and race next to our Olympic program competitors and witness some amazing races from Canadian swimmers as both of our teams come together," Rivard said in a statement.

The team will also feature Oleksiak, who became Canada's most decorated Olympian after picking up three medals at the 2020 Tokyo Olympics. That brought her medal haul to seven (one gold, two silver, four bronze) over two Games. She also picked up three silver at the Gold Coast Games.

Mac Neil, who won a medal of each colour in Tokyo, will be participating at her first Commonwealth Games.

This report by The Canadian Press was first published May 9, 2022.