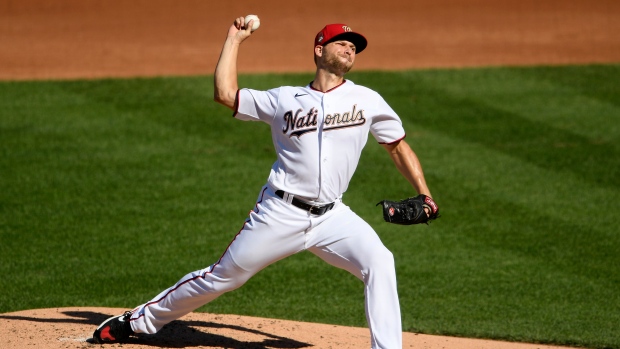 WASHINGTON — The Philadelphia Phillies tumbled out of a playoff position, getting swept in a doubleheader by the Washington Nationals when Yadiel Hernández hit a game-ending, two-run homer in eighth inning off Brandon Workman for a 8-7 win in Tuesday night’s second game.

Philadelphia (27-29) lost its fourth game in a row and dropped behind Cincinnati (28-28), Milwaukee (27-27) and San Francisco (27-27). The four teams are competing for the National League’s final two playoff berths.

“We’ve dug ourselves a hole and we’ve done that before and we’ve been able to fight out of it,” Phillies manager Joe Girardi said. “Now we have to win games and rely on other (teams).”

The 32-year-old Hernández became the oldest player to hit a walkoff homer for his first big league home run, according to STATS. Hernández defected from Cuba in 2015, signed with Washington the following year and debuted Sept. 10.

“It never crossed my mind that I was going to end the game that way,” Hernández said through a translator. “I obviously thought I was going to hit a home run at some point because part of my game is to hit homers. I have the ability. I just didn’t foresee it happening in that moment where it ended the game on a walk-off home run like that. I’m very emotional and very excited.”

Philadelphia took an 7-6 lead in the eighth when leadoff hitter Roman Quinn bunted against Daniel Hudson (3-2) and third baseman Brock Holt threw past first an into the seats for an error that allowed Phil Gosselin to score from second.

Hernández homered with one out in the bottom half off Workman (1-4), who has a 6.92 ERA in 14 appearances since Philadelphia acquired him from Boston last month.

“I have to do my job light years better than I’m doing it now,” Workman said.

Juan Soto, started in right field for the first time in his 308-game big league career, hit a three-run homer in the fourth, his 12th homer this season and first since Aug. 31.

Voth’s complete game in the opener was his first in 20 big league starts and his first victory in 10 starts this season.

“I feel like I’ve been chasing that for a while,” Voth said of the complete game. “More importantly, just going deep into the game today. I felt like with the doubleheader and how our bullpen is, it gave them a little bit of a rest. I’m ecstatic right now.”

Asdrúbal Cabrera hit an RBI single in the first, Trea Turner doubled in a run in the second and Holt hit a two-run double in the third.

The doubleheader included a makeup of an Aug. 27 game postponed as a response to racial injustice in the wake of a police officer shooting Jacob Blake, a Black man, in Kenosha, Wisconsin, four days earlier.

Phillies: C J.T. Realmuto (hip) returned for the first time since Sept. 12 after missing 11 games. He caught the opener and served as the DH in the second game. … RHP Spencer Howard (shoulder) threw a bullpen session Monday. … Manager Joe Girardi said 1B Rhys Hoskins (left elbow strain) would undergo treatment Tuesday and might pick up a bat. Hoskins went on the injured list Sept. 15.

Nationals: Manager Dave Martinez said INF Howie Kendrick (left hamstring strain) still wants to return this week but has reached a “stalemate” in his recovery. “He’s definitely pushing to come back and at least DH one game or play or something,” Martinez said. “We’ll see how he feels.” … 3B Carter Kieboom (bruised left hand) was out of the lineup but was expected to try to take some swings Tuesday.

Phillies: RHP Zach Eflin (3-2, 4.28 ERA), who pitched seven-inning shutout against Toronto in his last outing, is 3-3 with a 4.43 ERA in eight starts against Washington.