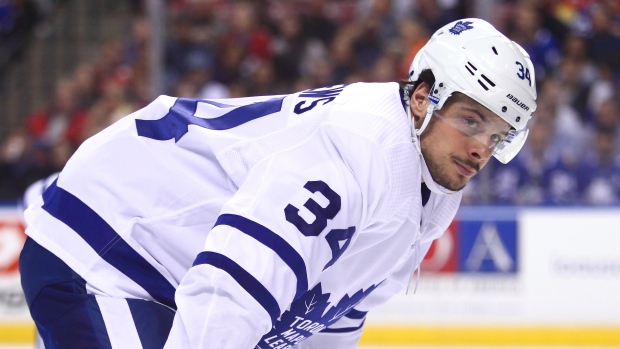 Auston Matthews told reporters Sunday that he wasn’t having a lot of fun watching as he sat out the first three games of the season while continuing to recover from an off-season wrist procedure.

He isn’t going to be a spectator much longer.

Matthews will make his 2021-22 debut Monday night as the Maple Leafs host the New York Rangers at Scotiabank Arena Monday evening. To mark his return, here is a statistical look at Matthews’ career so far and where he sits among some of the best goal scorers of all-time in the early stages of his NHL journey.

Matthews has had just about the best start to a career any player could expect to have. Since his four-goal NHL debut against the Ottawa Senators back in October of 2016, Matthews has kept filling up the back of the net with the kind of consistency rarely found in any player, let alone one in their early 20s.

The 24-year-old centre begins his sixth season with 199 goals in 334 games and is looking to become the second fastest player in Leafs history to reach 200 goals behind Charlie Conacher, who hit the mark in 317 games. It took Conacher parts of nine seasons to score his 200th, although his teams didn’t play anywhere near an 82-game schedule and Conacher did lead the league in markers five of six years between 1931 and 1936.

Only 18 skaters in NHL history have tallied 200 goals or more in 335 or fewer games to begin their careers, with Washington Capitals sniper Alex Ovechkin (200 goals in 296 games) as the only active player to do so.

Matthews has a comfortable goal-scoring lead over Connor McDavid (182 goals in 364 games), but McDavid outpaces Matthews by 229 assists and 228 points with the an advantage of 75 extra regular-season games played.

Matthews had the most prolific season of his career in 2020-21, scoring 41 goals in 52 games to lead the league by a comfortable margin and capture the first Rocket Richard Trophy of his career. McDavid was a distant second with 33, while only three other players reached the 30-goal mark – Alex DeBrincat with 32, Leon Draisaitl with 31 and Mikko Rantanen with 30.

Matthews elevated his goals-per-60-minutes to a personal-best 2.2 last season and upped his career goals-per-game average to 0.60.

So, what might he do this season? Well, if past years are any indication, he could be poised to hit the ground running.

The Scottsdale, Ariz., native has recorded at least a point in every NHL regular-season debut of his career and at least two points in four of five. Matthews followed up his four-goal effort against the Sens with a one-goal, two-assist outing the following year against the Winnipeg Jets. He then scored two goals apiece in his 2018-19 and 2019-20 debuts before settling for a one-assist night last January against the Montreal Canadiens.

From 2016-17 to today, Matthews is tied with Ovechkin and Anze Kopitar of the Los Angeles Kings for the most points (12) in their first games of the season. But don’t forget – Matthews is still yet to make his season debut in this campaign and will move to sole possession of first with a goal or an assist Monday.

Matthews also ranks first in opening-game goals (nine) ahead of Ovechkin (seven) and McDavid (six) in that same span.

Most Points In First Game of Season (16-17-Present)

Matthews slid into his regular spot as top-line centre Sunday at practice between Nick Ritchie and Mitch Marner and confirmed his return to the lineup soon after. Matthews’ Aug. 13 procedure cut into his off-season skills training and forced him to miss parts of Toronto’s training camp sessions, but head coach Sheldon Keefe doesn’t think his star centre will be a step slow coming back.

In fact, he’s expecting the contrary.

“His skating to me looks even better than it was a year ago, and I thought he skated better a year ago than he did two seasons ago,” Keefe said. “He's changed his body, his training, but he's also committed a lot more time to working on his skating given that he couldn't handle pucks [after surgery] and he looks a lot quicker out here than what I've seen him before in the past. Those are the kinds of things that just add another layer to this game.”

“I just want to continue having that consistency every single night. It’s hard to do night after night,” Matthews said. “And that's why the best players are the best players for a reason, because it's easier to be good for a week or a month but it's really hard to be good night after night consistently so that's really all I focus on is being prepared.”