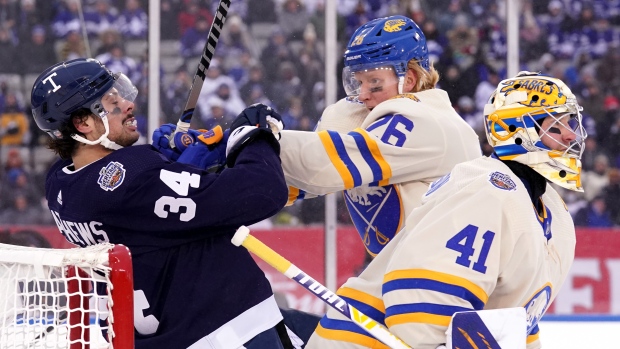 Matthews and Dahlin had an exchange in front of the Sabres' net during the third period with both players trading shots before Matthews cross-checked Dahlin in the head.

Matthews has no prior history of supplemental discipline. He will fork over $116,402.50 in salary for the two games missed, tweets TSN Hockey Insider Chris Johnston.

Toronto's star forward scored in the game but was a minus two in 20:26 of ice time as the Sabres went on to win 5-2 at Tim Hortons Field.

Matthews closed out play Sunday with a six-goal lead in the NHL's Rocket Richard race with 45 goals. Edmonton Oilers centre Leon Draisaitl sits second with 39 while Chris Kreider of the New York Rangers trails close behind in third.