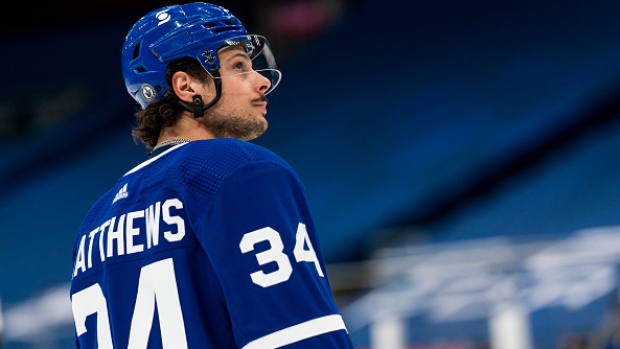 Toronto Maple Leafs star Auston Matthews was listed on the team's injured reserve for the opening day of training camp on Wednesday.

General manager Kyle Dubas told the media that Matthews has returned skating, but won't be a full participant to start training camp.

"He won't be a full participant in camp off the start," said Dubas on Wednesday. "He's back skating. He'll come out of the splint. We expect him to be ready [Game 1]."

Kyle Dubas on Auston Matthews (wrist): "He won't be a full participant in camp off the start. He's back skating. He'll come out of the splint. We expect him to be ready [Game 1]."

The 24-year-old is still recovering from undergoing off-season wrist surgery on Aug. 13. The Maple Leafs announced that Matthews would miss a minimum of six weeks with the centre aiming to be ready to go for the opening game of the season on Oct. 13 against the Montreal Canadiens.

“It's coming along well. It's a couple more weeks until I can get out of the splint and start really rehabbing and build my strength back," Matthews said, per NHL.com. "I'm going to get back on the ice this week. I'm really hopeful to be ready to go in Game 1."

Matthews encountered discomfort upon increasing his on-ice training earlier in August and the team's medical staff recommended he have surgery.

The fifth-year player, selected first overall by the Leafs in 2016, led the league with 41 goals in 52 games and took home this year's Maurice "Rocket" Richard Trophy.

The Maple Leafs will open their preseason on Sept. 25 against the Canadiens.