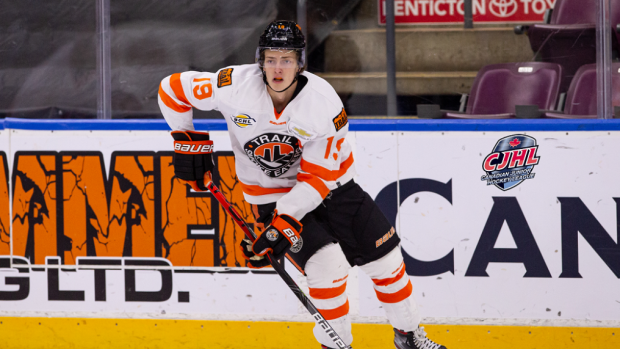 Kent Johnson was only eight years old, but he remembers being in the crowd when his favourite team, the Vancouver Canucks, finally vanquished the Chicago Blackhawks in the 2011 Stanley Cup playoffs.

"[Alex] Burrows slayed the dragon with that slap shot on Corey Crawford," Johnson said with a smile. "Never going to forget that one ... We probably would go to one playoff game a series back in those days, so really lucky I ended up being at that one."

The 18-year-old from Port Moody, B.C. lists that game as his favourite fan moment growing up.

Pretty soon Johnson may be in position to create some special moments for young Canucks fans. The Michigan Wolverines forward is projected to be a top pick in the upcoming National Hockey League draft and TSN director of scouting Craig Button has Vancouver picking him in his latest mock draft.

"It'd be a dream come true to get to play for my hometown team," Johnson said.

During a conversation with TSN, Johnson spoke about why Vancouver's Elias Pettersson is a role model and where his game grew the most this season. The following is an edited transcript of the interview.

You're a really a creative player, where does that come from?

"Kind of naturally. I like to watch a ton of the best offensive players in the NHL and I think they make some creative plays, so I try and play like them a lot and just naturally try and have fun out there. That's the way I play."

Who are your favourite guys to watch?

"I'd say Pettersson in Vancouver and [Patrick] Kane in Chicago."

What do you like the most about Pettersson’s game?

"He has a similar body type to me and it doesn't matter. He still wins a lot of battles, protects the puck and makes a lot of skilled plays."

Back in December you scored a really nice backhand goal against Minnesota, what did you see on that play?

"It was a delayed penalty and I jumped on for the goalie as the extra attacker and slung low, got the puck and just beat one or two guys and then beat another guy and tried to get the backhand off and luckily it went in a good spot there."

This goal is a prime example of Kent Johnson's offensive abilities.

He's so elusive and creative that plays like this are common when he's on the ice.

He is emerging as one of my favourite players of the draft.#2021NHLDraft pic.twitter.com/7fsStV1WG9

It's fun to look at some of your highlights on YouTube. I was looking back at your BCHL days with the Trail Smoke Eaters and there was a shootout goal when you just had one hand on your stick the whole way. What was your thought process there?

"I kind of did that a lot at practice, at the end of practice on my goalie, and it kept working every time and he was like, ‘Yeah, that’s so surprising that you can shoot that so quickly.' We kind of talked that out and were like, 'Yeah, that can work in a game.' So, first shootout of the year I tried it and it was a big goal and we were both pretty happy when it went in."

Here’s the goal everyone is talking about. Kent Johnson scores with one hand on the stick in the shootout last night! #WeAreSmokeEaters pic.twitter.com/d2qZxvkM1C

How do you assess your season in Michigan?

"It was a solid season. It definitely got a lot better as the season went on and there's a lot to build on for next year."

Where do you feel like your game grew the most?

"Just protecting the puck against the older guys in college. At the end of the year, it was really tough to get the puck off me even though I was a younger guy and skinnier guy. I used my body well to protect it."

From a forward's perspective, what's it like going up against Wolverines defenceman Owen Power in practice?

"It's a good challenge, for sure. He's so big and skates so well at his size and he's got such a long reach and a good stick and just really smart with the way he defends. It's really tough to get around him."

What stands out the most about linemate Matthew Beniers?

"I was lucky enough to get to play with him all year and everyone notices that motor right away and how he's just going all day. And it's like that in practice too. He's working so hard the whole practice, buzzing around, and obviously he has a really good two-way game and is great defensively, but that doesn’t mean he’s not good offensively. He can definitely put the puck in the net and make plays. So, it's really fun to play with him."

"Really cool. Some of the people are kind of NHL legends, which you get to talk to, which is pretty amazing."

Who is one legendary hockey figure that you've talked to that's stood out?

"Maybe it helped that I didn’t know he was going to be on the call so I didn't really have time to think about that or be nervous and he was really nice to me, so it was good."

Was he asking a lot of questions or just listening?

"He was mostly listening. They had a lot of guys on there, maybe six or eight, asking questions, but he definitely asked a fair bit of questions too."

What's one question that you've gotten from any team that's surprised you?

"Geez, they're kind of all blending into one now. I know a lot of times they ask you to rate your skills out of 10 or whatever and that's something I never really think of doing. So, that's a challenge for me to kind of think about every skill on its own like that."

What gets the highest marks in your game?

"Probably my hockey IQ and my puck skills."

What are you going to be focusing on in the off-season?

"Just mostly focusing on filling out and getting stronger and faster and doing some power skating to tweak my stride a little bit ... I try and get on the ice with skating coach Barb Aidelbaum. She's been awesome for me."

What are you learning?

"Just little things here and there about my form that, before I went to her, I didn't notice on my own. Mostly little things that once she points out it's like, 'Geez, I really didn't do that. Like, that's pretty easy to fix.' Stuff like that, she has a really good eye for."

Can you give us an example?

"In a straight line, I wasn't getting enough upper-body rotations, so I'm just rotating my upper body more to give me more power and not use my legs as much."

"Well, I think everybody at Michigan believes we have a national championship-contending team again, so that's a big thing."