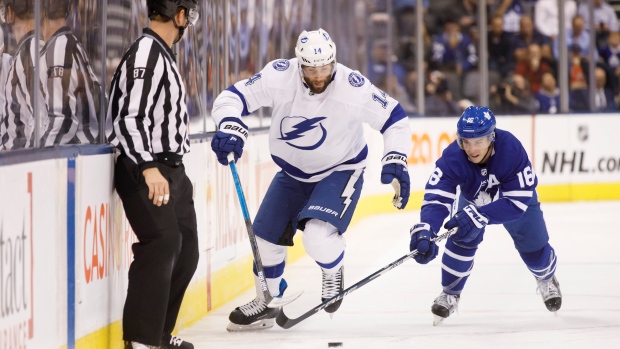 Pat Maroon and Mitch Marner battle for the puck Thursday. , The Canadian Press

TSN Toronto reporter Mark Masters checks in daily with news and notes on the Maple Leafs, who practised at the Ford Performance Centre on Friday before travelling to Detroit for Saturday night’s game against the Red Wings.

The Maple Leafs have allowed 15 goals in a three-game home losing streak, but Mike Babcock believes his team is making progress in their own end.

"Our defensive numbers are real good so far this season," the coach said after a brisk 30-minute workout. "We're happy with that. Last night we weren't good enough. We made some mistakes and it ended up in our net, but we gave up chances like we don't normally give up. So that’s the biggest concern."

Babcock insists the meltdown against the Lightning in a 7-3 loss Thursday is not a symptom of larger defensive issues. Instead, it was simply a case of his team getting outworked, something that was addressed Friday morning.

"I thought our meeting was more important than our practice, to be honest with you," Babcock said. "The other team was hungrier and faster and better than us last night. I think that's the No. 1 thing. You know, it's easy for you to string them (losses) together, because that's the way they go. We thought we played great against St. Louis. We didn't win. So, to me, they're night and day different. Maybe we were feeling so good about the way we played against St. Louis we forgot to play last night."

The Leafs fell 3-2 against the defending champions on Monday in a game where they held a significant advantage in possession (62.6% CoriFor) with a 34-18 edge in scoring chances, per NaturalStatTrick. There were a couple breakdowns on the game-winning goal with John Tavares pointing out he needed to do a better job on the draw and Kasperi Kapanen losing his man (Alex Pietrangelo) on the play.

That defeat was preceded by another blown lead as the Leafs went up 4-1 in the third period against Montreal on Saturday before falling 6-5 in a shootout. But that game came on the second half of a back-to-back set at the end of a three-in-four stretch to open the season.

That said, the numbers do seem to back up Babcock's argument that early indications are positive. The Leafs are allowing 32 shots per game, which is down from 33.1 last season. Per NaturalStatTrick, they are allowing 20.6 scoring chances per game, down from 23.7 last season. And high-danger chances are down from nine to 5.6 per game.

However, bad habits can creep in quickly, which explained the sense of urgency around the team on Friday. And while Babcock doesn't see a pattern of defensive deficiencies in this skid, he does see a need for accountability following a brutal loss.

"Any time you play like you did last night, the first thing is the coach didn't do his job so we weren't ready to go," Babcock said before pausing. "No, I shouldn't say that. We were up 2-1 with eight minutes left in the first period, but we didn't stay playing, we got rattled, we didn’t keep digging in, we weren't good enough. So, then it goes to your leadership group and then it goes to everybody so we’re all involved."

Jake Muzzin is part of that leadership group and is the only player on the roster with a Stanley Cup ring.

"We need to be better," the defenceman said. "There's no question. Fifty-fifty pucks, defensive battles, pucks around our net, offensive pucks that we're losing battles, turning pucks over, we need a better commitment out of everyone, playing the right way and it starts with a defensive commitment ... You know, an effort like that shouldn't come from this club."

There seems to be an understanding inside the room that the team will succeed or fail this season based on how they grow as a defensive unit.

"It doesn't matter how much power you have," observed defenceman Tyson Barrie, "back end, up front, whatever, you have to be able to keep the puck out of your net if you're going to win hockey games and that's going to be the focus for us. I know we have a lot of guys who can put the puck in the back of the net and the focus for us has to be defence first."

Barrie, who was a team-worst -4 on Thursday, and Cody Ceci are new additions to Toronto's top-four this season and both readily admit they're still getting settled. Perhaps that adjustment period is leading to some of the breakdowns?

"That's a part of it," agreed Ceci, "there's a lot of new guys on the team, all new systems so we're just trying to get a handle on things."

What's the biggest adjustment from Ottawa?

"The biggest difference is that we do have some speed on our team and we got to utilize that," he said.

"There's subtle differences," said Barrie when asked to compare Toronto's system to Colorado. "It's nothing too crazy. I think our D-zone coverage is a little different and the way that we try to get through the neutral zone is a little different, but it's still hockey and we’re not reinventing the wheel or anything. It's a system where if you work hard and are detail-oriented you'll have success."

Barrie, Ceci and rookie Rasmus Sandin are newcomers on defence with new assistant coach Dave Hakstol now overseeing that group. But neither Barrie nor Ceci believe the transitional period is an excuse for how Thursday played out.

"New faces, it's going to take a little bit to get the chemistry and feel each other out a little bit," Barrie said, "but there's no excuse to get beat up on like that whether you're new faces or not, this is the National Hockey League and this is our job so it’s just one you got to learn from ... They flat out outworked us in our own building and kind of embarrassed us."

"It's a bit of a wake-up call for us," said Ceci. "We just kind of learned that we can't skill our way through every single game. There's other teams that are just as skilled as us and if they work harder than us they're going to win."

One issue for Toronto in Thursday's loss was the penalty kill, which allowed two goals to the Lightning after allowing just two goals in the previous four games. On one of the goals, Mitch Marner lost a faceoff and moments later a Nikita Kucherov shot rocketed past Frederik Andersen.

"I still got to practice a lot more," Marner said after the game. "I can't lose that that clean, you know, it's a sh---ty way to happen, it's an unfortunate way," he said. "Just got to make sure that these next couple practices I keep practising, I want to talk to (Jason) Spezza a lot about these draws. I know he's a guy who's been relied on a lot on that right side and I can learn from him and learn some sneaky plays off faceoffs."

Sure enough, Marner stayed out late after the main practice session on Friday to work with Spezza on draws.

Spezza was in the box when Marner, a right winger, got cleaned out by Anthony Cirelli. Marner, who plays on the top penalty​ kill unit, is hoping to improve on faceoffs so he can potentially be trusted more in those situations down the road. Spezza is 6-3 on shorthanded face-offs this season while Nick Shore, who's expected to replace him in the line-up Saturday, is 4-3 in that situation. Frederik Gauthier is 2-6 on short-handed draws while Alexander Kerfoot and Tavares are both 0-1.