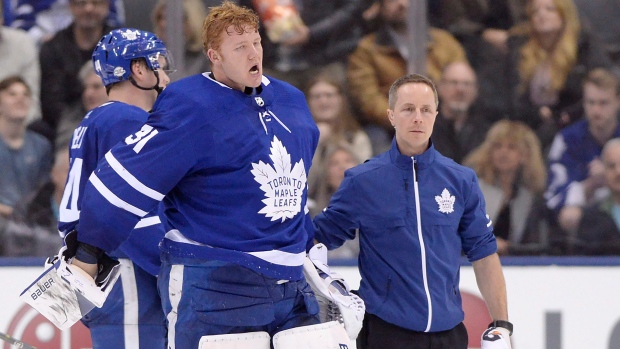 Toronto Maple Leafs head coach Mike Babcock said after the team's 7-4 win over the Anaheim Ducks Monday he thinks Frederik Andersen will be fine after the goalie left the game early.

Mike Babcock: "I think fine. I was just talking to him. He seems good."

"I think fine," Babcock told reporters when they asked how Andersen was. "I was just talking to him. He seems good."

Andersen left late in the second period against the Ducks with an apparent head injury.

Andersen was injured when Corey Perry's skate hit him in the mask. Perry was tripped up by Leafs defenceman Ron Hainsey as he cut across Andersen's crease.

Andersen's mask fall off as a result of the hit and the goalie lay on the ice for several moments before skating to the bench under his own power and leaving to the dressing room.

Curtis McElhinney replaced Andersen with 6:15 left in the second period.