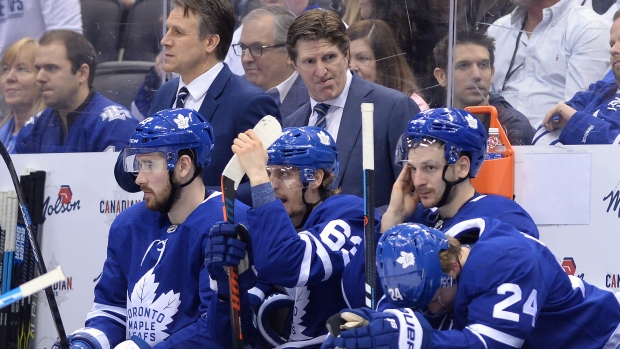 Mike Babcock and the Maple Leafs bench , The Canadian Press

Toronto Maple Leafs head coach Mike Babcock said Friday a decision on the team's captaincy is "coming up" and will "end the speculation."

Babcock said his ideal captain will handle the role similar to that of Kawhi Leonard's leadership of the Toronto Raptors last season.

"They do it right every day," Babcock said. "There was a guy who played for the Raptors last year, I don't know if you remember his name. He came into town and he changed things overnight with an unbelievable demeanour, with a stick-to-itiveness like I haven't seen, with a competitive edge, not bothered by much, left all his talking to his play, and they were able to win the championship. And I thought he made the team better around him.

"To me, that's leadership, that's what they do, they bring it every single day."

Mike Babcock said #Leafs will announce their decision on captain coming up, “and end the speculation”

“I don’t know. That’s the most honest answer I can give," Dubas said. "We talk about it frequently, and I think a lot of it is driven by the fact that [the media] likes to talk about it. A year ago, I stood here and had different conversations where I didn’t think it was the most important thing. I think now, having gone through a season with the group [as GM], we have a great number of leaders in [the room] and they are all independently capable of doing the job.

"The one thing we don’t want to do is rush just to make it happen and say it’s done and do it now versus waiting until we’re absolutely 100 per cent sure and then regret that decision later. So we’re just going to be absolutely certain about that because it’s an important thing to the community and the organization.”

The team has spent the past three seasons without a captain after trading Dion Phaneuf to the Ottawa Senators in 2016.