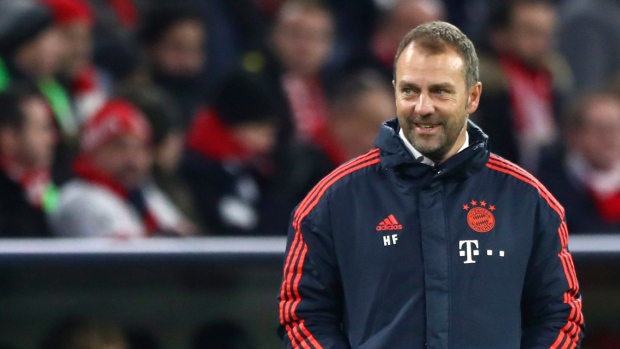 BERLIN — Bayern Munich is running out of healthy players as it bids to make up lost ground in the Bundesliga.

The Bavarian club ended a run of two league losses with a 3-1 win over Tottenham in the Champions League on Wednesday, but has few options ahead of three Bundesliga games in a week.

Bayern hosts struggling Werder Bremen on Saturday, then visits Freiburg on Wednesday before its final game before Christmas against Wolfsburg in Munich.

France winger Kingsley Coman was forced off in pain after landing awkwardly on his left leg against Tottenham, leaving interim coach Hansi Flick with only 13 players from the senior team for Bremen’s visit.

Niklas Süle, Lucas Hernandez, Fiete Arp and Michael Cuisance are all out, Javi Martinez is suspended, and Corentin Tolisso is doubtful with a left thigh problem picked up in last weekend’s 2-1 loss at league leader Borussia Mönchengladbach.

David Alaba, who missed the win over Tottenham, is expected to return, as will top scorer Robert Lewandowski, who was given a break Wednesday as Bayern wrapped up six wins from six in the Champions League.

Coman won’t play again this year, though his injury isn’t as serious as initially feared. Bayern said Thursday the Frenchman only has a capsule tear in his left knee, pulled his biceps tendon and jarred the knee joint.

“We all got a huge shock," Bayern sporting director Hasan Salihamidzic said. "He had a couple of serious injuries in the last one or two years, that’s why you always think the worst.”

“It’s important that we don’t give away any more points in the Bundesliga,” Bayern midfielder Joshua Kimmich said.

Bremen should provide a return to form. The northern team’s losing streak to Bayern goes back over 17 games, a league record.

Interim coach Flick, who took over from the fired Niko Kovac, started with four wins in all competitions before two somewhat unfortunate Bundesliga losses ended the honeymoon start.

Still, the former Germany assistant coach has the backing of Bayern chairman Karl-Heinz Rummenigge, who intimated Wednesday that he may be kept on until the end of the season.

“Hansi has our trust. I’m convinced that he will live up to it,” said Rummenigge, who said a decision on whether Flick remains coach after the winter break will be made in the days after the Wolfsburg game on Dec. 21.

Bayern captain Manuel Neuer is among those calling for Flick to stay.

“Everything has been going great in the team so far. The communication is super and the philosophy suits us,” Neuer said. “That’s why we’re all positive when it comes to the coach.”