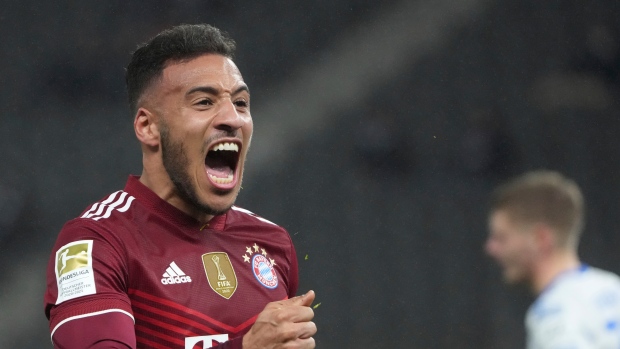 He didn’t have to as Bayern Munich outclassed Hertha Berlin 4-1 on Sunday to restore its six-point lead in the Bundesliga.

The visitors should have won by even more with Bayern having a host of missed chances. It also saw two goals rightly ruled out through VAR.

Corentin Tolisso and Thomas Müller scored in the first half before Leroy Sané and Serge Gnabry rewarded Bayern’s dominance in the second.

Substitute Jurgen Ekkelenkamp scored seconds after coming on for Hertha’s consolation goal, but the scoreline didn’t reflect a game in which the home team had four attempts at goal compared to the visitors’ 30.

“It was fun for 90 minutes,” Bayern midfielder Joshua Kimmich said. “We controlled the game.”

Lewandowski, who scored a hat trick as Bayern won 5-0 in the teams' previous meeting in August, remains on 23 goals after 20 rounds of the league.

Leipzig defeated Wolfsburg 2-0 in the early match, stretching the visitors’ winless run to 11-games across all competitions.

Wolfsburg’s slump is good news for Hertha, which remains just three points above the relegation zone, one point above Wolfsburg.

That’s not good enough for Hertha’s long-suffering fans, who had been led to believe European qualification was just the start after Lars Windhorst invested 374 million euros ($425 million) in the club since 2019.

Local media reported that around 80 Hertha fans crashed the team’s training session on Saturday to berate the players following their German Cup defeat at home to city rival Union Berlin on Wednesday.

A DJ played Sunday to a virtually empty stadium before kickoff – only 3,000 people were allowed in the 74,475-capacity Olympiastadion due to measures against the coronavirus.

In contrast to Hertha, Bayern had a whole week to prepare for the game as there was no German Cup distraction. The Bavarian powerhouse was knocked out by Borussia Mönchengladbach — 5-0 — in the previous round.

Bayern needed less than two minutes to score, though Tolisso’s goal was chalked off for offside after the VAR check.

Kingsley Coman crossed for Tolisso to head the opener in the 25th, ending a brief encouraging period from Hertha.

Bayern’s attacks resumed and Müller duly scored before the break when Hertha’s defense failed to track him for Kimmich’s free kick.

Vladimir Darida might have made the game exciting when he missed Hertha’s best chance from close range after Maximilian Mittelstädt crossed from the left.

Bayern maintained its grip on the game and Korkut reacted with three changes before the hour-mark, bringing on new signing Fredrik André Björkan for his Bundesliga debut.

The visitors continued to miss chances until Hertha’s best player, goalkeeper Alexander Schwolow, gifted Sané the third goal in the 75th when he tried to play the ball across goal.

Sané thought he’d ended the game with a flourish as he scored arguably the finest goal in the 89th. But a VAR check showed he controlled the ball briefly with his arm before he let fly inside the far post.

It didn’t matter in the end as Bayern ruthlessly showed why it’s expected to wrap up a record-extending 10th consecutive title. Borussia Dortmund had cut the gap to three points on Saturday with a somewhat fortunate win at Hoffenheim.