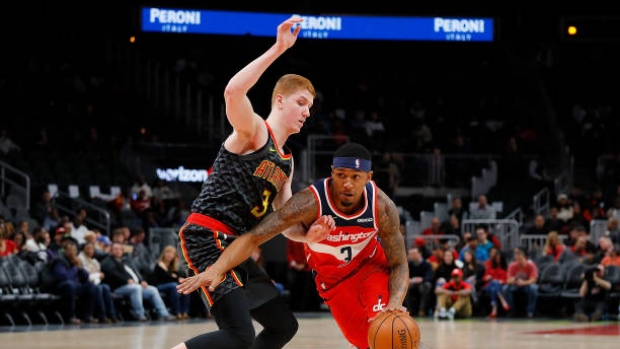 ATLANTA — Bradley Beal could tell early in the first quarter that the rebuilding Atlanta Hawks had no answer for him.

"Just being confident, just being aggressive," he said. "Getting to the free throw line helped me out a lot. Being aggressive in that aspect. Just pretty much taking what they gave me."

Beal scored a season-high 36 points, Otto Porter Jr. had 20 points and 11 rebounds, and the Washington Wizards won their third straight game with a 131-117 victory over Atlanta on Wednesday night.

Beal, with nine assists and nine rebounds, was a matchup nightmare for the Hawks, who began the night with the NBA's third-worst record and lost their fourth straight. John Collins finished with 14 rebounds and a career-high 26 points, and Kent Bazemore added 22 points for Atlanta.

Rookie guard Kevin Huerter was the first Hawks player assigned to guard Beal, and he was replaced early. Atlanta coach Lloyd Pierce tried several combinations but nothing worked for long.

Beal drew Collins, a 6-foot-10 forward, out to guard him in the third quarter and quickly cut past him. Rookie point guard Trae Young closed in the lane too late as Beal drove for a layup and a 19-point lead.

Beal took the ball to the rim often enough to get to the foul line and hit 10 of 13 free throws. The Wizards finished 27 for 32 at the line.

"We have to play fast, and that was easier because we got stops defensively," Beal said. "We were able to get out in transition and get some easy ones. We just continued to move the ball and share it."

The Hawks used a 45-point third, their highest-scoring quarter of the season, to pull within seven in the first minute of the fourth on Bazemore's jumper.

Young had a chance to make it a three-point game but missed a wild layup attempt at the 9:48 mark, and Tomas Satorsky followed with a 3-pointer to push the lead to eight.

Young, the fifth overall pick in this year's draft, took a hard spill 30 seconds later as he tried to shoot a 3 at the top of the arc, falling into Austin Rivers on the way down and getting his feet knocked out. Young landed on his back and elbows and stayed down before getting up to make one of three free throws.

"I didn't even see what happened," Young said. "I was just in the air and I fell. My arms were numb, and it was hard to move. I was pressing on my free throws, pushing the ball instead of shooting it."

Beal answered with a runner and hit a pair of free throws on the ensuing possession to push the lead back to double digits.

"He's so crafty," Young said. "He showed that tonight. With John being out, they were able to use him a lot more."

Wizards: It was the first game Wall has missed this season. Knee problems sidelined him for 41 games last season. Washington coach Scott Brooks didn't have an immediate timetable for Wall's return. ... F Jeff Green was sidelined with back issues for the second time in the last three games. ... Beal has scored at least 20 points 18 times this season. ... Rivers opened on the floor for the first time since starting 59 of his 61 games with the Los Angeles Clippers last season. ... Wall didn't play in a win last January in Atlanta, and the Wizards still posted 40 assists. Reserve guard Tim Frazier dished out 14 in that game.

Hawks: Reserve G Jeremy Lin left with a lower back strain and didn't return after playing four minutes. ... Collins got his fourth double-double at the five-minute mark of the third. ... Bazemore started in place of F Taurean Prince, who injured his left ankle in Monday's loss to Golden State and will miss three weeks. ... Atlanta closed the third on an 11-0 run.

Wizards: At Cleveland on Saturday.