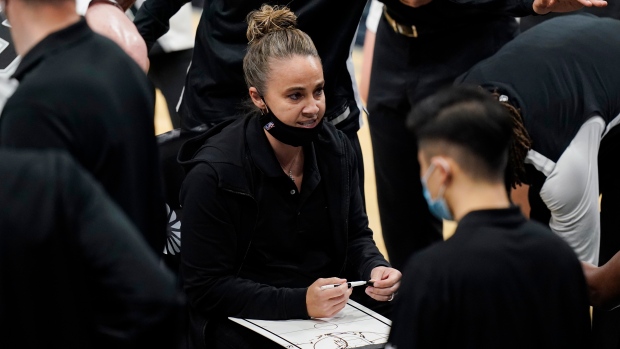 Becky Hammon is closing in on a landmark deal to become the next head coach of the Las Vegas Aces, according to Shams Charania and Chantel Jennings of The Athletic.

The report adds that Hammon's deal will be a record-setting contract for a WNBA head coach.

According to ESPN's Adrian Wojnarowski adds the deal is five-years and will make Hammon the league’s highest paid coach.

Hammon, an assistant with the NBA’s San Antonio Spurs, was also in talks with the New York Liberty.

A move to the WNBA would bring Hammon back to the league for the first time in seven years following her retirement as a player in 2014.

Hammon played 16 seasons in the WNBA. Her first eight came with the New York Liberty where she averaged 10.4 points and 2.5 assists and 2.3 rebounds per game.

After her playing days, Hammon joined Gregg Popovich's staff in San Antonio as an assistant coach in 2014.

Last summer she was also a finalist for the Portland Trail Blazers' head coach opening.