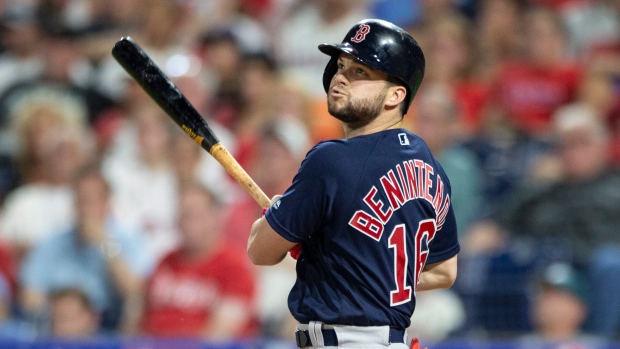 PHILADELPHIA — Pitching their ace every fifth day to boost their post-season hopes hasn't worked out for the Philadelphia Phillies.

Pinch-hitter Andrew Benintendi's sacrifice fly in the top of the ninth inning lifted the Boston Red Sox to a 2-1 win over Philadelphia on Saturday night.

The Phillies were mathematically eliminated from the NL East race when the Braves beat Washington earlier in the day to increase their lead in the division to 10 1/2 games over the Nationals. Philadelphia fell 3 1/2 games behind the Chicago Cubs for the second wild card spot and also trails the Brewers and Mets.

"I'm not gonna sugarcoat it and say we have much time left but we won't hang our heads," right-hander Aaron Nola said after allowing one run and four hits with nine strikeouts in seven innings.

Red Sox starter Eduardo Rodríguez had a season-high 12 strikeouts for the defending World Series champions, who entered the night 10 games out of a post-season berth.

After Nola beat Boston at Fenway Park on Aug. 20, manager Gabe Kapler has used him on his normal four days' rest even when the team has off days in between his starts. The Phillies are 0-5 in Nola's starts since then and have only scored 15 runs combined in those games. Nola has a 4.15 ERA in the five games but allowed three runs or less in six innings or more in three of them.

"We have to find ways to scratch more runs across for Nola," Kapler said. "It's tough. Something we have to correct."

They're running out of time with 15 games remaining.

Mitch Moreland led off the ninth with a single off Hector Neris (3-6) and Christian Vázquez ripped a single to left-centre, sending pinch-runner Chris Owings to third. Shortstop Jean Segura made a leaping catch on Jackie Bradley Jr.'s hard liner but pinch-hitter Brock Holt walked to load the bases. Benintendi then sliced a fly ball to left that scored Owings to put Boston up 2-1.

Matt Barnes (5-4) tossed a scoreless eighth and Brandon Workman finished for his 16th save in 22 tries.

Rodríguez allowed one run and four hits in 6 2/3 innings and remains at 17 wins.

Nola took a two-hitter into the seventh before running into trouble. Rafael Devers walked to start the inning and J.D. Martinez singled up the middle. After Moreland struck out, Vázquez drove a double off the wall in left-centre to score Devers.

Nola then walked Bradley to load the bases but Gorkys Hernández grounded into a third-to-home forceout. Red Sox manager Alex Cora elected to keep Rodríguez in the game and Nola struck him out to end the inning.

But Rodríguez surrendered the lead in the bottom half.

Bryce Harper led off with a single and César Hernández hit a two-out single. Rodríguez hit Adam Haseley with a pitch to load the bases and Maikel Franco walked on a 3-2 pitch, forcing in the tying run.

Nola retired the first 10 batters before Xander Bogaerts lined a single to right in the fourth.

"We've seen him the last two years," Cora said of Nola. "With all due respect to all the pitchers that we have faced, he's been the best one. I love the way he competes, love his stuff, he doesn't panic. He's pitched twice over there at home and twice here, but with the offence that we have, he still dominates us. They really have a good one. He's a special one. It would have been cool to face him in October, but I guess we'll face him next year."

Red Sox: OF Mookie Betts was scratched because of a sore left foot and Holt was scratched due to illness. Cora said Betts could return Tuesday.

Phillies: LF Corey Dickerson did not start because of a sore left foot. He could return Sunday.