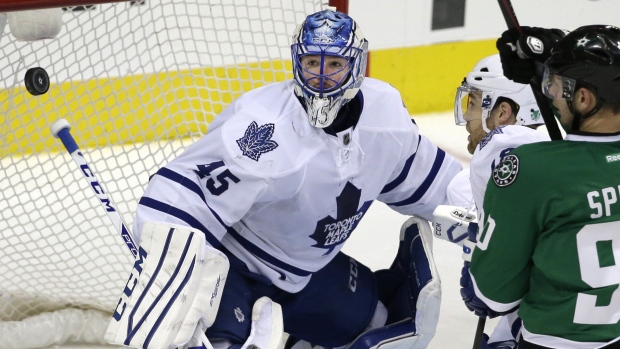 DALLAS - Jonathan Bernier wasn't quite satisfied after earning his second shutout of the season and posting his second-highest save total.

"Most of the night I felt pretty good, but there's just a few that got away from me," the Toronto goalie said after making 43 saves as the Maple Leafs beat the Dallas Stars 4-0 on Tuesday.

James van Riemsdyk had a goal and two assists for Toronto, which snapped a three-game slide.

The Stars' four-game winning streak ended when they were shut out for the first time since Jan. 9 at New Jersey.

"I had a few bad rebounds but the D-men did a good job tying up sticks and letting me get back in position," Bernier said. "Timely goal, good power play, good penalty kill. That's how we won the game tonight."

Nazem Kadri opened the scoring 55 seconds into the game, and assisted when van Riemsdyk scored at 6:21 of the second period.

Phil Kessel had two assists, the second on Tyler Bozak's power-play goal at 10:30 of the second. Mike Santorelli finished the scoring with an empty-net goal at 16:09 of the third.

"Our special teams weren't good enough," Stars coach Lindy Ruff said. "We had a couple opportunities where we got a little stagnant on the power play, and not enough pucks went to the net.

"You've got to give Bernier a lot of credit. He was fabulous."

Bernier's save total, which included 19 in the third period, was one short of his season high. He has nine career shutouts.

"As always, your goalie's your No. 1 penalty killer. Bernie was called on far, far too often tonight," Maple Leafs coach Randy Carlyle said. "You know they're going to make a push, and we were able to withstand the storm, but Bernie was a big reason for it."

Toronto took a 1-0 lead in the first minute when van Riemsdyk passed from the right corner to the front of the net. Kadri beat the Stars' Tyler Seguin and Alex Goligoski to the puck and put it past Lehtonen.

Neither team scored again in the first period, though Seguin and Bozak each hit a post. Dallas outshot Toronto 10-8 in the period.

In the second, van Riemsdyk scored on a breakaway at 6:21. His backhand shot went between Lehtonen's legs.

The Maple Leafs' lead grew to 3-0 on Bozak's power-play goal. Dion Phaneuf's drive from the top of the slot deflected off Stars defenceman Jordie Benn to Bozak's stick at waist height. A review to determine whether the puck went in off his glove allowed the goal to stand.

Again the Stars had nothing to show for outshooting Toronto, 14-11.

Chippy play in the third period led to three minor penalties for roughing and a full-fledged fight between Phaneuf and Dallas' Antoine Roussel at 12:20. Phaneuf and Roussel were assessed a major and a minor penalty apiece.

NOTES: In five career games against Dallas, Kadri has nine points (four goals, five assists). ... Toronto D Stephane Robidas received an ovation when the Stars played a video tribute during a timeout. Robidas played 704 games for Dallas before being traded to Anaheim last season. ... Lehtonen came out of the net with more than four minutes remaining, but returned after Santorelli's empty-netter. Lehtonen had been pulled during the second period after allowing four goals in Sunday's 6-5 shootout victory at Edmonton.