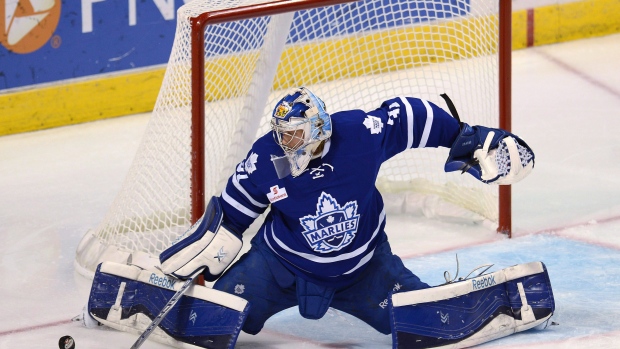 ROCHESTER, N.Y. - Jonathan Bernier's temporary teammates celebrated with him like he was one of their own after a 22-save shutout. He received a hearty ovation minutes later in the Toronto Marlies' locker-room.

Bernier's career is still with the NHL's Maple Leafs, but the struggling goaltender got his American Hockey League conditioning stint off to a spectacular start Friday night by shutting out the Rochester Americans. A three-hour bus ride from Toronto, Bernier showed glimpses of being the goalie the franchise envisioned when acquiring him two years ago.

That game was nowhere to be found in his first nine starts for the Leafs this season as Bernier went 0-8-1 with a 3.28 goals-against average and .888 save percentage, numbers that ranked among the worst in the league. Friday night at Blue Cross Arena, Bernier was dominant against minor-league competition.

"I'm here just to get my game and play some games," Bernier said. "If you don't play games and just practise, sometimes you lose that edge to go in the game. Tonight it was one of those nights I felt really good."

Bernier got plenty of support from his Marlies teammates as prospects William Nylander and Nikita Soshnikov each scored two goals to beat the Americans 4-0. It was Bernier's first victory since April 5 against the Ottawa Senators.

The Marlies also did a good job of limiting quality chances against, allowing him to see the puck without much trouble. Bernier did the rest.

"The guys understand what he's going through, and they recognize their role here in trying to help him out," coach Sheldon Keefe said. "I just liked watching an NHL goalie play today, it was a lot of fun."

Bernier's mind has been right there with the Marlies since the Leafs sent him down earlier in the week to get his game back on track. A 27-year-old established NHL goalie making US$4.15 million could have had a sour attitude, but instead he has approached the conditioning assignment with a positive one.

"He's been awesome," Marlies captain Andrew Campbell said. "We were out for dinner last night, and you wouldn't know that he's in the situation that he's in right now. He smiles, he's a great teammate in the dressing-room and he's been working really hard and the team obviously welcomes him with open arms."

The Leafs essentially pushed Bernier away this week in the hopes he can fix what was wrong with his game. A penchant for allowing bad goals damaged Bernier's psyche and cost him coach Mike Babcock's trust.

It got so bad that with James Reimer injured, the Leafs called up Garret Sparks to make his debut Monday against the Edmonton Oilers. Bernier went with the team to Winnipeg but was sent home to go on a conditioning stint that was scheduled to last 10 days.

Bernier agreed because he had lost confidence.

"Sometimes it's hard when you don't play," Bernier said. "By me coming here, just working on my game and getting some playing time, now I can go up after and feel good about playing some games. I know I can do it."

When Bernier can do it again remains to be seen. After Reimer aggravated his lower-body injury Thursday against the Minnesota Wild, the Leafs called up goalie Antoine Bibeau from the Marlies on Friday afternoon.

Bibeau left Rochester after 5 p.m. to join the Leafs on the road in St. Louis, according to a team spokesman. Sparks could make his third NHL start or Bibeau his first Saturday night against the Blues.

With Bibeau gone, the Marlies were forced to sign David Ayres, the building operations manager at Mattamy Athletic Centre, to an amateur tryout contract to serve as Bernier's backup. Ayres, a 38-year-old who occasionally works for the ice crew and drives the zamboni during Marlies games, made it to Rochester just over an hour before puck drop.

"I said that to one of the guys earlier ... 'Did you ever think that Bernier and myself would be on the roster at the same time?'" Ayres said. "Absolutely not."

Bernier probably didn't think even a couple of weeks ago that he'd be playing his first AHL game since May 22, 2010, when he was a 21-year-old Los Angeles Kings prospect playing for the Manchester Monarchs. The Laval, Que., native has come a long way since then, but Campbell saw the same dominant Bernier on Friday night he remembered from their time with the Monarchs.

"Just to get back in the win column and get a shutout to boot, he played really well," Campbell said. "Everything was sticking to him, there weren't many rebounds, he was really, really solid in there. It's got to be a step in the right direction for him to get his game back, for sure."