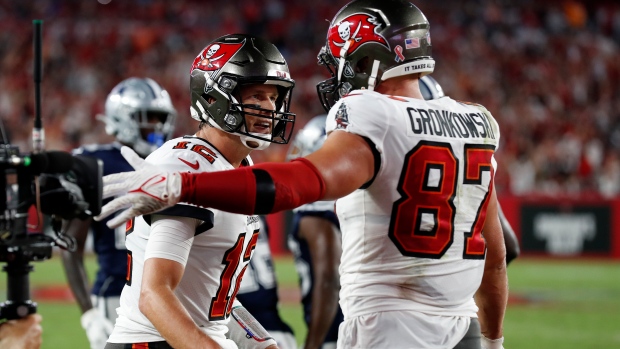 Week 2 in the NFL started the way that Week 1 ended, with the New York Giants covering as a 3.5-point favourite in a 30-29 loss to the Washington Football Team on Thursday Night Football.

NFL underdogs are now 13-4 against the spread.

There were nine outright wins in Week 1, and it took an abundance of mental mistakes for the Giants to fall just short of another in Washington.

After being told this entire week not to overreact to what we saw in Week 1, a couple of us had a hard time taking that advice.

Here are our best bets for Week 2 in the NFL.

There are a few teams that I’m high on heading into this weekend, but this is easily my favourite bet.

Last week, I took Denver as a three-point favourite against the Giants.

The Broncos rolled to a 27-13 win over New York that was actually a lot more lopsided than the final score indicated thanks to a Denver red-zone turnover and a last-second touchdown by Daniel Jones.

This week, Denver gets a Jacksonville side that gave up 37 points in a double-digit loss to one of the worst teams in the NFL in its opener.

It’s one thing to overreact to a loss.

It’s another to point out the fact that when you lose 37-21 to the Houston Texans, you have some issues that need to be corrected.

For the Jaguars, Trevor Lawrence’s development will feature ups and downs throughout his rookie season.

I’m banking on a down week versus a Broncos’ defence that has the potential to be one of the best in the NFL.

On the flip side, Jacksonville just gave up 449 total yards of offence to Tyrod Taylor and the Texans, so why would anybody think that they can slow down Teddy Bridgewater and a Denver offence that even without Jerry Jeudy is still loaded with playmakers?

Nobody wants to bet the Jaguars, and the hesitancy to bet a team that is playing its second road game in as many weeks to open the season has kept the spread below the key number 7.

The Broncos should be able to win this game by a touchdown.

Denver’s my best bet for the second week in a row.

After 20 years of letting Tom Brady ruin my Sundays, I have made the conscious decision to back the 44-year-old quarterback more than I ever have in this 2021 season.

In Week 1, Brady to throw more than 2.5 touchdowns was my best bet for Thursday night, and I’m back in Week 2 to ride him again.

The Buccaneers looked stellar in Week 1.

On the other hand, the Falcons did not.

A few days later, Matt Ryan accounted for just 164 yards through the air and was sacked three times by the Philadelphia Eagles.

On top of the three sacks, Ryan was hit nine times and it was largely in part due to lacklustre play on the offensive line.

A struggling offensive line taking on a defensive front that is one of the best in the league is a bad mix for any team.

Add in the offence that Tampa Bay provides on the other side of the ball and you have the recipe for a blowout.

Last season, the Bucs outscored Atlanta 75-54 in the two games they played.

Brady enters this game with a perfect 8-0 record in his career against the Falcons.

This game feels like a prime example of two franchises moving in opposite directions.

Don’t be like the market and overreact to what we saw in Week 1.

Despite its destruction of the Green Bay Packers, New Orleans is not the NFC’s top team, and Jameis Winston is not going to produce the NFL’s most efficient passing season ever.

Winston carved up a Packers’ defence that couldn’t have looked less prepared for five touchdown passes, and didn’t commit a turnover for just the second time in his past eight starts.

Green Bay barely laid a finger on Winston, but that won’t be the case versus Carolina. Only five teams had a higher pressure rate than the Panthers in Week 1, as they racked up six sacks versus the Jets, while forcing an interception and a fumble by Zach Wilson.

Outside of Alvin Kamara, the Saints lack elite playmakers, as evident by the fact that their top wideout Marquez Callaway is a former undrafted free agent.

Meanwhile, the Panthers have arguably the NFL’s most dynamic player in the backfield in Christian McCaffrey, and two outstanding receivers in Robby Anderson and DJ Moore. That should be more than enough weaponry for Sam Darnold to work with, who looked solid in his Carolina debut throwing for 279 yards and a score.
New Orleans will be without its top edge rusher Marcus Davenport, and could also be missing top corner Marshon Lattimore, elevating the Panthers offensive outlook.

Meanwhile, Winston’s teams are 7-14-1 ATS with him under centre as a betting favourite.

I’ll take the points with the Panthers in this one.