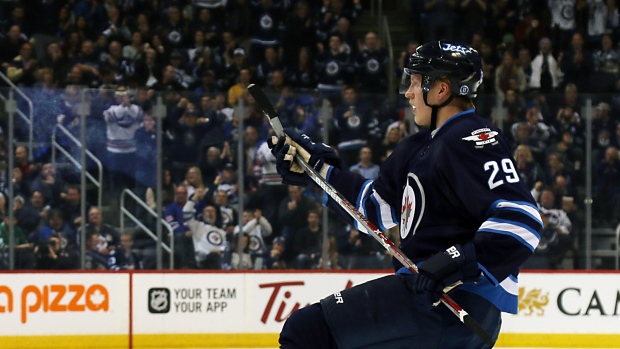 Last week, Dave Naylor and Michael Landsberg posed an interesting question on their TSN radio show: If you were the Toronto Maple Leafs, and the possibility of trading Mitch Marner to Winnipeg in exchange for Patrik Laine was available, would you do it?

My answer was an emphatic yes, even though I think Marner is every bit as good as advertised. The crux of my argument could be boiled down to one point: When you find an elite (and perhaps generational) shooting talent, you hold on to him at all costs.

Shooting at these rates is almost impossible. The guys who tend to do it are generational talents – like Ilya Kovalchuk and Steven Stamkos – or super-low volume shooters who really only take shots when necessary. Alex Tanguay and his career 18.6 per cent shooting percentage comes to mind here. The rest of the league is filled with guys who shoot at or around league averages throughout their career, going through periods where they can’t miss and periods where they can’t buy a goal.

The smart bet would seem to be that Laine can’t sustain such a fantastic shooting percentage. James Mirtle of The Athletic bristled at my notion that Laine could stand the test of time. His argument was not that Laine wasn’t a great shooter, but that maintaining a shooting percentage even above 14 or 15% or so through his prime would be a tall order. (As an aside, we have already prop bet this – I’m using this space to memorialize it so five years from now, one of us can hold the other accountable.)

The best point Mirtle made was simply how the NHL has trended over time. League shooting percentages are down across the board, and even a player like the aforementioned Kovalchuk struggles as a perfect comparable for Laine since goal scoring was more prominent during that era. For real apples-to-apples comparisons, we must consider data in the modern era – basically anything starting from 2007-08 and onward.

My rebuttal is pretty straightforward: What we have seen from Laine, at his age, seems pretty remarkable. The data on players who have done this at that age is also remarkable.

To illustrate this, I grabbed every single NHL forward in the modern era who shot 14 per cent or better (our wagered percentage) in a given year. Additional criteria: The player had to do it in either his rookie or sophomore season at age 18 to 20, average at least a shot per game (volume restrictor), and play in the majority of his team’s games in the given season. Further, I eliminated the lockout season due to the low games played threshold for that season.

The list is pretty small, but the majority of the names aren’t surprising: 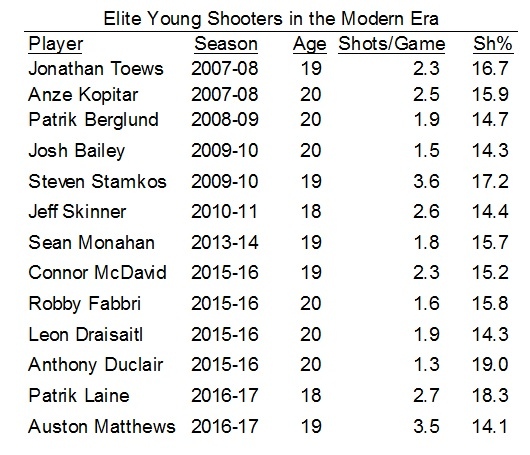 A few things stand out here. One, Laine’s current shooting percentage is ridiculous even when self-selecting comparisons against other players with notably upper-echelon shooting percentages, which is one of the big reasons why I think his true shooting talent is probably a shade lower (more on this in a minute). Two, it’s interesting to see that Laine’s not the only guy who populates this list from the last couple of season – four players qualified last year alone, and both Laine and Toronto’s Auston Matthews are above our threshold in 2016-17. The next logical step is to follow how these players have progressed since that initial season. Since our wager will cover five seasons, I’ll show each player’s season+1 shooting percentage in totality or up to five years in length, whichever is applicable. 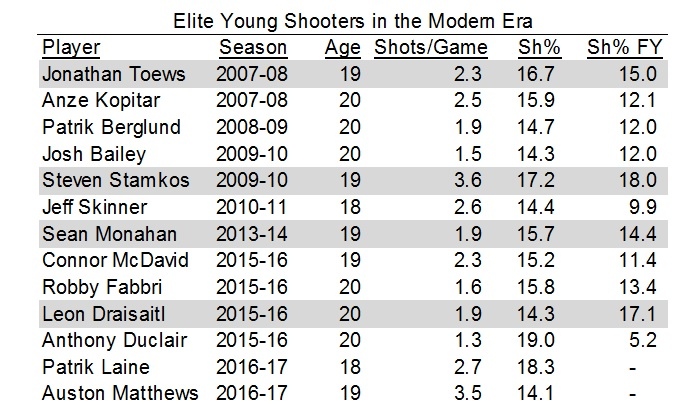 The percentages are a bit less favourable than I thought they would be – four of 11 guys managed to sustain that 14 per cent rate. I think you can probably swap in a guy or two (McDavid, probably), but you’d also have to concede that a guy like Monahan is just as capable of falling out. Either way, at first pass, you are talking about a one-in-three shot.

I think we have subset the data to death at this point, but I’d bring up one more thing here in my defence – some of the players listed I don’t think would register as true Laine comparables. We aren’t blind to outside knowledge, and that outside knowledge seems meaningful here.

As a proxy for that, we can look at where those players were selected in their given draft years.

I think this helps my case a bit further. I’m just not sure types like Duclair, Fabbri, or Berglund – three guys who couldn’t sustain such high shooting rates – had the same pedigree/talent as the players we are talking about. If you want to subset the data again to control for that discrepancy, well, your odds start looking a lot like 50/50.

This is a long-winded way of me trying to say: if Laine is that guy, and it seems very possible he is, then he’s a guy you would trade just about anyone for. That’s especially true if you are Brendan Shanahan and Lou Lamoriello and see an opportunity to acquire maybe the best pure young sniper in the game to play alongside maybe the best pure young centre in the game not named Connor McDavid.

Marner is a fantastic talent, but a guy who can find the back of the net with such frequency is a rare weapon that so few teams around the league have.

As for the bet I’ve made with Mirtle? Well, it’s possible I just spent a lot of time coaching myself into lofty shooting numbers. But if anyone can do it, it’s probably Laine