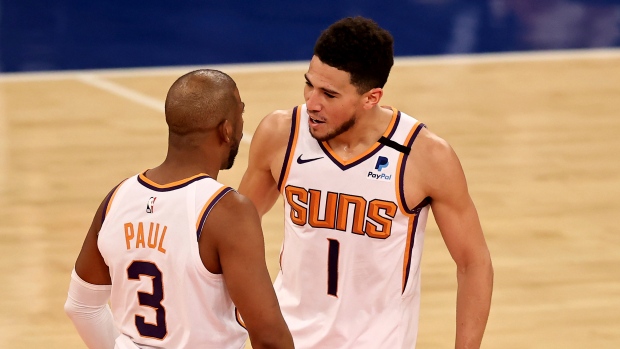 In mid-January, the Phoenix Suns were +3300 to win the Pacific Division. By the time that February rolled around, their odds to win their division had shortened to +1300.

That’s a significant adjustment, but still pretty good value for a team that was right there with the Los Angeles Clippers and Los Angeles Lakers at the top of the division standings at the time.

Fast forward a month and a half later, and the Pacific Division odds are off the board at several spots.

The Suns, which extended their lead atop the division to 3.5 games up on the Clippers with a 123-120 win over the Oklahoma City Thunder on Sunday, can still be found between -1000 to -1200 odds at a couple of spots still offering odds to win the Pacific as of this morning.

It’s a remarkable turnaround for a team that was completely overlooked heading into the season.

Phoenix extended its win streak to four in a row with Sunday night’s win over the Thunder.

The win snapped a string of 16 straight road losses versus Oklahoma City dating back to December of 2010.

The Suns re-take the No. 1 seed in the Western Conference standings tonight & win their first road game in Oklahoma City in over a decade.

The Suns entered today on a 16-game road losing streak at the Thunder. Their last win before tonight was Dec. 19, 2010. pic.twitter.com/ByQcK242HU

The last time the Suns won in Oklahoma City, the building was still called the Oklahoma City Arena (now the Chesapeake Energy Arena) and Phoenix was led by Hall of Fame point guard Steve Nash.

This time around, Devin Booker led the way with 32 points and six assists. Chris Paul had 18 points and 11 assists.

The Suns are 3.5 games clear of the Clippers for the best record in the Pacific with eight games remaining.

Phoenix is also tied with the Utah Jazz for the best overall record in the Western Conference.

Despite their impressive run, the Suns are still +1800 to win an NBA championship, making them the seventh choice on the board.

As someone who has followed the team closely all season, I’m looking forward to seeing what Phoenix can do come playoff time.

The Lakers’ struggles continued with a 121-114 upset loss to the Toronto Raptors late Sunday night.

Kyle Lowry, asked if the trade deadline was on his mind going into tonight's game vs the Lakers: "There's no extra motivation. I didn't care about anything other than winning this game."

Los Angeles, which was a 10-point favourite at home, has dropped three straight and six of its past seven overall.

The defending champs are still the favourite to reach the NBA Finals at +170 odds to win the Western Conference.

At 36-28, the Lakers are currently in a three-way tie for fifth in the conference standings with the Dallas Mavericks and Portland Trail Blazers with eight games to go.

The Lakers have lost 6 of their last 7 games — including tonight at home to the Raptors playing without Fred VanVleet, Gary Trent Jr and OG Anunoby.

They are now 7th in the West.

All of a sudden, there is a legitimate conversation about whether Los Angeles can avoid the play-in tournament. The Lakers have a tough schedule to close out the season, beginning with the Denver Nuggets, Clippers, Trail Blazers and Suns this week.

The Toronto Blue Jays (+110) beat the Atlanta Braves 7-2 on Sunday to complete the three-game series sweep.

After winning seven of its last nine, Toronto is now 1.5 games back of the Boston Red Sox for the best record in the American League East.

With just a couple of weeks left in the NHL regular season, there isn’t much to watch for when it comes to playoff races.

The only real intrigue is in the Central Division, where the Dallas Stars are three points back of the Nashville Predators for the final playoff spot, with a game in hand.

In the West Division, the Arizona Coyotes are three points back of the St. Louis Blues for the final playoff spot, but with three more games played.

The real intrigue heading into the final stretch is at the top of the divisions, with three races in particular to keep an eye on.

In the Central, the Carolina Hurricanes are two points up on the Tampa Bay Lightning with a game in hand.

The Hurricanes have three more games against the Chicago Blackhawks and two versus the Nashville Predators, which is why they are a -1400 favourite to win their division.

Meanwhile, the East Division is still wide open, with four teams still in the mix.

The division-leading Pittsburgh Penguins are five points up on the fourth-place Boston Bruins, but with two more games played.

The West Division is considered a two-horse race heading into the final stretch.

The Vegas Golden Knights are four points up on the Colorado Avalanche for the best record in the division with one more game played.

The Minnesota Wild, which are six points back of the Golden Knights for first place, are +5000 to win the Pacific.