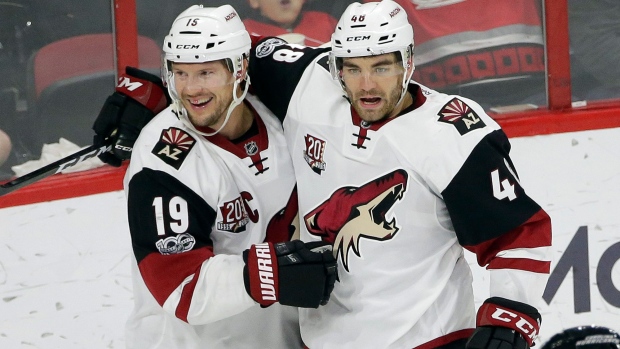 BOCA RATON, Fla. - NHL commissioner Gary Bettman explained the reasoning behind a letter he sent to the Arizona Legislature, warning that the Coyotes cannot make their long-term home in Glendale.

"I don't want it misconstrued. We are not giving up on the Coyotes in the Greater Phoenix area," Bettman said Wednesday, after the NHL general managers meetings wrapped up for the week.

"The fact that the Coyotes are even having discussions about moving out of Glendale is because the city of Glendale chose to terminate the long-term agreement they had with the team. Had they not terminated that agreement, we wouldn't be having this discussion. The Coyotes are looking at the numerous options they have in the Valley and we expect one of them to go to fruition."

Bettman said the purpose of the letter was to counter the lobbying he believed the city of Glendale has been doing with senators in the Phoenix area.

"I believe the city of Glendale was lobbying, saying if the other municipalities - the senators from those municipalities - don't approve it, then the team will have to stay in Glendale," said Bettman. "That's not going to be the case. The team has got a number of options and is going to pursue them, so nobody should think that team is moving other than out of Glendale. But short term they're going to stay in Glendale while they're pursuing the options."

Francois Gagnon joins the show to discuss the situation in Arizona with the NHL and why the league is hesitant to bring a team to Quebec City.

Bettman wrote a letter to the Arizona Legislature that was revealed on Tuesday. It advocated for Senate Bill 1149, which would establish a public-private partnership for financing a new Coyotes arena in the East Valley or downtown Phoenix.

The Coyotes initially played in downtown Phoenix after the franchise relocated from Winnipeg in the summer of 1996, and they have played in Glendale since 2003.

During the team's time in Glendale, it has been afflicted by poor attendance in large part because the majority of the fan base is on the east side. For a four-year period, the team was operated by the NHL as new owners were sought to keep the team in the region.

But even after the sale of the team in 2013, there were ongoing issues with the lease arrangement between Glendale and the Coyotes, which prompted ongoing legal challenges and the constant threat of relocation. The Glendale City Council opted in 2015 to terminate the Coyotes' existing 15-year lease, and the sides eventually signed a two-year agreement that expires June 30.

Last month, Arizona State University pulled out of a deal with the Coyotes to build a new arena in Tempe.

Despite all this, Bettman said Wednesday that he believes the team is not leaving the Phoenix area to re-locate to another market.

"I'm very confident," said Bettman. "I want to repeat we have not given up on that market, but we wanted to make clear that the long-term future and viability of that team, the Coyotes, isn't going to be in Glendale."

Added Bettman: "We think it's a good market. We think circumstances have come together consistently where there has always been an issue. We wouldn't be having this conversation if Glendale didn't cancel the long-term lease."