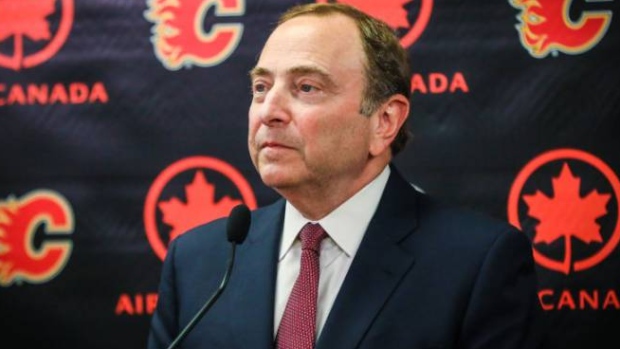 CALGARY — NHL commissioner Gary Bettman says the Calgary Flames' financial situation "continues to deteriorate" as the team continues to operate out of the aging Scotiabank Saddledome.

"This building, in its time, was a work of art. Its time is long past," said Bettman, speaking to reporters in Calgary as part of his Western Canadian tour. "They don't build buildings like this anymore."

Bettman listed a lack of amenities for fans and players as well as opportunities for ownership to generate revenue among the many shortcomings of the building, which opened in 1983.

He said it simply doesn't compare in any way to Rogers Place, the new home of the Edmonton Oilers, which opened up last season.

"Have you been up the road to Edmonton? Do you see a difference between the two buildings? You know the answer to the question."

Bettman added that Calgary concert-goers are losing out too.

"I was told (Thursday) that there were 27 acts, some of them multiple days, that have played in Edmonton since the building opened that haven't played here. That goes to the quality of life of the city and that's an indication as to the differences in the buildings."

While Bettman said he wasn't in town to make threats, he painted a bleak picture of the Flames' financial future if it continues to operate out of the NHL's oldest building.

"The team's competitive situation, financial stability, is obviously being impacted with each season that they stay here," said Bettman. "They used to write a cheque for revenue sharing. For the last couple years, they have been receiving cheques. The cheques are getting bigger."

Calgary Mayor Naheed Nenshi has said the Flames' proposal for a $500-million arena places a heavy tax burden on the city, but the Flames say the city's plan would ultimately see the team foot the entire cost of construction.

Currently, neither side is talking with the team having said publicly that they have abandoned pursuit of a new building and that they will remain in the Saddledome, doing the best they can for as long as they can.

"Everything I've heard, (Calgary's ownership group) sees no reason to have any discussions," Bettman said, adding he agrees with the team's position. "They tried, they thought they were on a path, they actually had a proposal on something akin to Edmonton that would take a part of the city and transform it. A part of the city right now where the land is blighted and unusable, and ultimately nothing got any traction."

Bettman was involved throughout the process in Edmonton, working with then Mayor Stephen Mandel and owner Daryl Katz in helping get the deal done. He has no such involvement in Calgary.

"You can't dance unless you're invited to the dance. I haven't been invited to this dance," said Bettman with a smile. "I can consult with the club, I can work with the club, we can discuss their situation, we can explore options — if and when — but there's nothing really for me to do here."

In other hockey matters, Bettman spoke about the successful season season-ticket drive that started in Seattle on Thursday. Deposits for the minimum 10,000 season tickets were received in 12 minutes. By the end of the first hour, they had reached 25,000 deposits.

"They have begun what looks like an amazing expression of interest," said Bettman. "Obviously, that's one of the many factors that we have to evaluate as we go through the expansion process."

He added that process is still in its infancy and there are still many steps to come for the Seattle ownership group.

"There are some boxes we have evaluate and check before the board gets anywhere close to having to make a decision."

Bettman also touched on the NHL's absence from the 2018 Winter Olympics in Pyeongchang, Korea, which he reiterated as a "good decision", saying it won't impact the league's potential participation in 2022 in Beijing, China.

"I'm not going to predict what's going to be in the future," said Bettman. "While we're very focused on helping to build the game of hockey in China, in Asia, I'm not sure whether, or if, participation in the 2022 Olympics is an essential or important part of that."

The commissioner also expressed his satisfaction with the league's current playoff format. Through the 1980s, 16 teams made the playoffs in what then was a 21-team league. The league is now 31 teams and the quantity of teams that make the post-season has not changed.

"The regular season is compelling, exciting, unpredictable and we have great races," said Bettman. "We're going to have teams that make or don't make the playoffs by a point or two. I think what we've got now is pretty good and I believe most of the clubs feel the same way. "

Calgary is one of the teams in a playoff races. They sat one point out of a playoff spot in the Western Conference with 17 games to go heading into a Friday night game against the visiting New York Rangers.