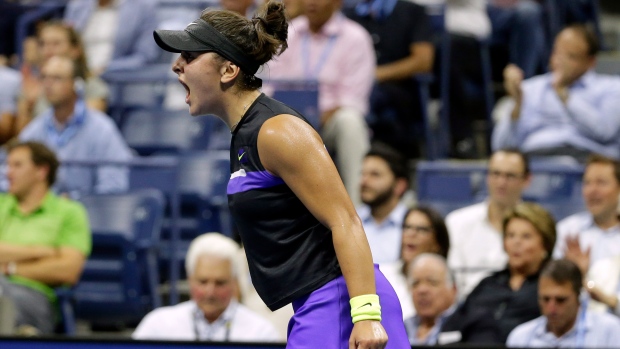 It was the 12th consecutive three-set victory for the Canadian, who moved into her first career Grand Slam semifinal Thursday night against No. 13 seed Belinda Bencic of Switzerland.

Andreescu looked anguished after her quarterfinal win as she looked over at her supporters. And then she sat down, leaned over in her chair, and nodded her head and smiled.

"This is honestly so crazy," she said in her televised post-match interview on court. "A year ago I was in the qualifying round. I was suffering from a back injury. And now, what I've accomplished this year, I'm speechless.

"I need someone to pinch me right now. Is this real life?"

The conditions were challenging for both players. There was heavy humidity, stagnant air inside Arthur Ashe Stadium and bugs all around — and on — the court that had to swated away before serves.

Andreescu changed her sweat-soaked top on the court after the first set. She used the ice towel around her neck, hugging it to her face at times and running it down her legs.

Mertens, in comparison, looked far cooler — on the outside, at least. But both players went off for a complete change of clothes after the second set.

With no American featured in the women's match and Rafael Nadal coming up afterwards, the New York fans were late to fill up Arthur Ashe Stadium. Throughout, even deep into the third set, they were entering the stadium, and milling about in the lower bowl.

Fans were engaged and noisy during Andreescu's match against American Taylor Townsend on Monday night, even if they were cheering for her opponent and getting on Andreescu at times. But there was a low-level buzz going around the stadium Wednesday.

It wasn't Andreescu's kind of crowd. And her early energy level reflected it.

In the early going, everything went right for Mertens, who clipped lines with regularity. The unforced errors piled up for Andreescu.

Mertens won 82 per cent of the points on her own second serve in that first set. Andreescu had to settle for a 26 per cent success rate.

She did her best to pump herself up, though. And she cleaned up her game significantly even as Mertens's level dropped from the championship level she displayed in the first set.

Andreescu has had plenty of slow starts in 2019, and has built a reputation for turning things around.

She has 43 matches wins on the season, and needed three sets to win 17 of those. Of those three-set wins, 10 came after she lost the first set.

Andreescu, who began her first career U.S. Open ranked No. 15, will end up in the top 10 when the new rankings come out Monday.

She should end up no lower than No. 9. Either Elina Svitolina or Serena Williams can still pass her. But not both, as they'll meet in the semifinals Thursday night.