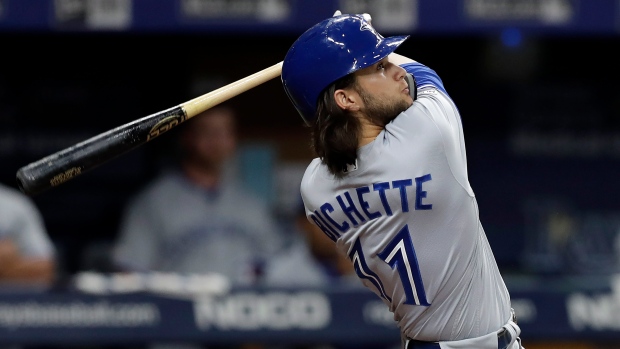 TORONTO — The phrase "Bo Knows" is one you’re going to be hearing a lot.

But just 12 games into his MLB career, it’s the baseball world that now knows what Bo Bichette knew all along: He was ready for the big leagues.

It’s not only the stat sheets littered with persuasive evidence of that readiness, but the way the 21-year-old Toronto Blue Jays shortstop carries himself away from the field and in front of the media, as well.

There’s an intense swagger combined with a dash of humility.

That confidence was part of the reason Bichette was so comfortable speaking up weeks prior to his eventual July 29 debut, telling anyone who would listen from Buffalo that he was ready for The Show.

The man who knows him best, his father and former Colorado Rockies Blake Street Bomber Dante Bichette, has been listening to Bo beg for a big league call-up for a while now.

“Bo’s been telling me since he was three years old that he could play in the big leagues,” Dante said with a fatherly grin. “Welcome to my world. He was ready. I think he’s been ready. He was ready to get on with it. I don’t think he slept in a few weeks because he could feel it coming soon.

“I was watching the (Triple-A Buffalo Bisons) game when he actually got yanked out and they said he was going to the big leagues. I had trouble getting words out for a little while, man. I was like, ‘Wow.’ ”

With Bichette starting his career scorching hot and showing more pop than anyone could have imagined out of the gates — doubles in nine straight games set a new MLB record — the Jays fan base has quickly taken to the Orlando native with the flowing locks.

Even Bichette didn’t expect to be doing what he’s doing.

“I’d be lying to you if I said I thought that I’d be breaking records, but I do expect to play well and I think those records are a byproduct of putting in the work and going out there and being aggressive, and trying to treat the game like any other game,” Bichette said.

Teammates and coaches knew Bichette was talented, but raking like he has out of the gates isn’t something you dare predict.

Even 53-year-old manager Charlie Montoyo, with 32 years of experience in professional baseball, is amazed by what his co-franchise player — remember that Vladdy Jr. kid? His bat is red-hot, too, but no one has noticed — is doing.

Not only was he setting records, he was hitting tape measure home runs, launching his first bomb at Rogers Centre off the facing of the third deck in left field.

“When I hit the homer, that was the first chills moment I’ve had in the big leagues so far,” Bichette said. “Running around the bases, the crowd was pretty loud, the loudest I’ve ever had, so that was a pretty cool moment.”

It’s hard to envision Bichette ever needing to go back to Triple-A, and he finishes a four-year minor-league career with a .321/.380/.515 slash line with 37 homers and 73 stolen bases, all while being young for his level every step of the way.

The hit tool, power, and the value wrapped up in the bat are all quite clear.

But it’s the glove that’s been questioned since Bichette was a high schooler, leading him to put in a winter of work this past off-season that led to the Blue Jays front office being taken aback when he came into the spring.

Bichette, himself, noted how proud he was to debut in the big leagues as a shortstop after all the questions, and Dante knows how much that meant to him.

“The reason everybody thought he’d change positions is he just didn’t move well,” Dante said. “The truth of it is — and you’ll still see some scouting reports that he’s an average runner — he’s a really, really, really good runner now, and he put in the work. That’s a big one, the fact that he’s put in the work to move an elite level and that allows him to play shortstop in the big leagues. That work right there shows how intense he is.”

When Bichette made his debut in Kansas City at Kauffman Stadium, it was an eerie setting for Dante.

This story will live on in baseball lore and will likely be told many, many times as Bo’s journey continues.

“Made my debut in Kansas City in No. 11, the same number he’s wearing, and hit a fly ball to Bo Jackson, who I actually named him after, basically,” Dante said with a gleam in his eye. “I love Bo Jackson. So, yeah, baseball has interesting stories like that.

“I remember it like it was yesterday. Time flies, man. You blink and here you are watching your kid in the same spot.”​