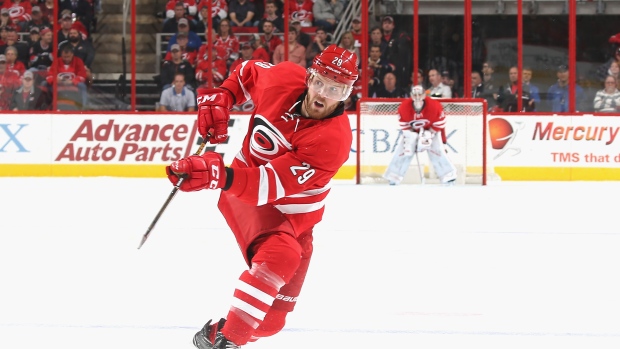 The Carolina Hurricanes placed forward Bryan Bickell on waivers Thursday, a step to help Bickell return to the NHL.

Bickell has not played a game - at any level - since being diagnosed with multiple sclerosis (MS) in early November.

Placing him on waivers will allow Bickell to be assigned to the AHL's Charlotte Checkers for more than two weeks.

"I'll tell you what: he's done everything he possibly can to get himself ready and get back at it, so we'll see where it leads," Hurricanes head coach Bill Peters said of Bickell earlier this month, per the team's website. "It's an unreal source of inspiration, and his attitude has been fantastic through this whole thing. I give him nothing but credit there."

The 30-year-old played seven games with the Hurricanes this season before he was diagnosed, scoring one goal. He has been taking part in practice with the team for more than a month.

The three-time Stanley Cup Champion spent the majority of last season in the AHL and had just two assists in 25 games with the Blackhawks. He was traded to the Hurricanes in June of last year.

"Since the 2015 playoffs, I've been struggling to understand what was going on with my body. Again during the past few weeks, it felt like something wasn't right," Bickell said in November after his diagnosis. "Obviously this is a bit of shock for my family and me, but I am hopeful I will be able to return to the ice and continue playing the game that I love."

The Bowanville, ON. native was a second round pick (41st overall) of the Blackhawks in 2004 draft.