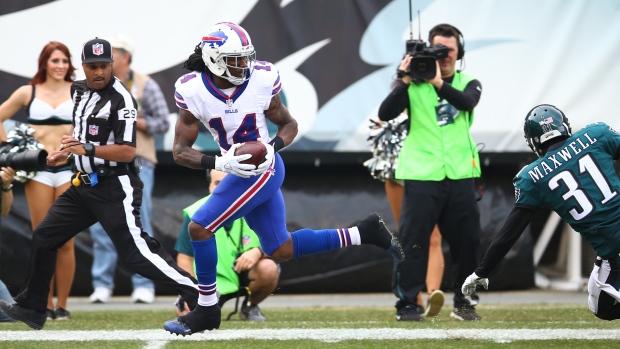 Watkins, who is recovering from surgery to repair stress fractures in his left foot, admits he will have to be cautious in his return to the field.

“For training camp, I think I’ll definitely be available,” Watkins told TSN.ca. “I might sit out two or three days. It’s all about how I feel within those days. The goal is to come back and be prepared for training camp.”

Watkins underwent surgery on his foot in April and graduated from crutches to a walking boot before arriving without any visible sign of an injury in Toronto late last week.

The 23-year-old wide receiver says he’s starting with the basics of the position as he looks to get back to full speed for his third professional season.

“Basically we are just taking it slow,” Watkins said, “doing the little things now as far as cutting and moving around; the basics. There’s really no timetable. It’s really when I feel healthy, when I am healthy.

“The important part is getting on the field and staying healthy. So, basically my whole summer will be staying in Buffalo getting better.” 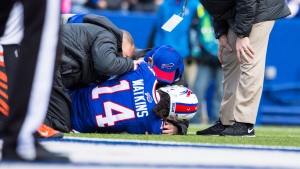 Durability has been a concern in Watkins’ brief NFL career. He missed three games last season due to calf and ankle injuries and has also had issues with his hip and ribs.

“I really think [injury] is part of the game, just being so aggressive, running full speed, playing full speed. It’s a physical sport,” Watkins said. “…Once I figure my body out and do the assessment I need to do, I’ll figure out what type of food, everything I need to do to keep myself on the field.”

The fourth overall pick of the 2014 NFL Draft came under media and fan scrutiny when he missed the opening day of Bills’ voluntary workouts in April. Watkins, who was in South Carolina for football camp, posted a photo from a casino as his teammates arrived at team facilities for the first time ahead of the 2016 season.

What had not yet been reported was that, present or not, Watkins’ foot would not of allowed him participate in any workouts. He showed up one day later, as planned with coaches, but added it’s important for him to block out the opinions of those who don’t know the full story.

“You can’t really pay attention to what’s going on out there, because I don’t really think they know what’s going on with the coaches and with the communication we have,” Watkins said. “Everything is kind of talked about or being addressed. So, my coaches knew I wasn’t there. Everyone knew why I wasn’t showing up, so it wasn’t up for me to actually address it. That’s the coaches and the organization’s job to cover me.

“I mean, me being there does help, so that’s why I was actually there the next day. So being there for the whole OTAs does help me to pick up the defences and the offence and to be engaged is very important.”

Two years ago, the Bills traded two first-round picks to move up six spots to select Watkins, a budding star from Clemson. The price tag was steep and so were expectations.

Watkins has since led the Bills in receiving in each of his two seasons (including surpassing 1,000 yards last season), but he notes his draft status forced him into a leadership role as soon as he arrived.

“Definitely had to [take a leadership role],” Watkins said. “Me being drafted that low, I gotta have a voice. I can’t just be selfish and say, ‘Oh I’m just doing my job.’ I definitely gotta get that leadership role.”

Watkins made headlines last December when he called out his Bills teammates for not holding each other accountable, but added at the time that he too wanted to be held accountable.

“As far as speaking up, I think I’ve done that throughout this whole off-season, communicating with the coaches and with the players and that’s what’s needed from me.”

Bills head coach Rex Ryan declared the team the winners of the off-season of Thursday, praising the teams compete level and work ethic through mini-camp and OTAs, a sentiment Watkins backed up one day later.

“I definitely do [think we won the off-season],” Watkins echoed. “I think we had heated practices but we competed for the most part on both sides of the ball. The defence and the offence really knock heads, me messing around with the defensive guys. I think this has been the best off-season that I’ve been a part of.”

The Bills will hope the off-season work pays off when they open the 2016 season searching to end their 16-season playoff drought. Having Watkins healthy will a go long toward making that goal more realistic.

*Watkins was in Toronto as part of a promotion by Courtyard Marriott to have the wide receiver interact with the fans at the city’s NXNE festival.