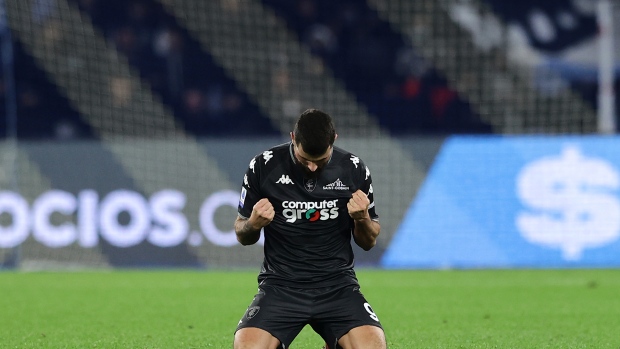 MILAN (AP) — Inter Milan gave an emphatic sign of intent as the defending Serie A champion moved to the top of Serie A with a crushing 4-0 victory over relegation-threatened Cagliari on Sunday.

Lautaro Martínez scored and missed a penalty in the first half, and Inter ran riot after the break with goals from Alexis Sánchez, Hakan Çalhanoğlu and another from Martínez.

Inter moved a point above AC Milan after its city rival drew 1-1 at Udinese on Saturday. Napoli could have moved level with Milan but lost 1-0 at home to Empoli.

“It’s always important to win, regardless of how other teams have done," Inter captain and goalkeeper Samir Handanović said. "We wanted to send out a message today, to both ourselves and our opponents.

"We’re on good form, we’re feeling good, and we’re reaping the rewards for what we’ve done.”

The top four are separated by four points. Atalanta moved above Napoli and into third with a 2-1 win at Hellas Verona.

Inter broke the deadlock at San Siro in the 29th minute when Martínez headed in Çalhanoğlu's corner.

Martínez had a chance to double Inter’s lead moments before halftime after Alessio Cragno brought down Sánchez but the Cagliari goalkeeper atoned for his error by saving the penalty and Çalhanoğlu sent the rebound over the bar.

Inter did get its second goal five minutes after the break as a throw-in from the right was controlled by Nicolò Barella and then crossed in for Sánchez to volley into the bottom left corner.

Çalhanoğlu added a third in the 66th when he cut inside from the left and curled the ball into the bottom corner, and Martínez put Inter out of sight two minutes later. The Argentina forward controlled Barella's ball over the top on his chest and then lifted it past Cragno with a delicate volley.

It could have been more as Sánchez hit the crossbar late on.

Napoli was on the receiving end of a bizarre goal.

Empoli scored the only goal of the match in the 70th minute. A corner was floated in from the left, Napoli midfielder André Anguissa headed it onto the back of Patrick Cutrone’s head at the near post and the ricochet took the ball into the back of the net.

Napoli hit the woodwork twice. Once in the first half when Eljif Elmas’ 20-yard effort cannoned off the crossbar. And again, after Empoli had taken the lead, when a fierce strike from Andrea Petagna came off the base of the right post.

Juan Jesus did have the ball in the back of the net after a goalline scramble but it was ruled out for offside. That came seven minutes before Empoli’s strange winner.

Atalanta put aside its Champions League disappointment as it fought back to win in Verona and set a new club record of six successive away victories.

Aleksej Miranchuk canceled out Giovanni Simeone’s opener in the first half and Teun Koopmeiners scored what was to prove the winner in the 62nd minute -- thanks in part to a huge deflection off Verona defender Adrien Tameze.

Atalanta was knocked out of the Champions League after it lost 3-2 at home to Villarreal on Thursday in a game that had been postponed a day because of snowfall.

Two Sassuolo goals in six second-half minutes from Domenico Berardi and Giacomo Raspadori saw the home side fight back to beat Lazio 2-1.

Mattia Zaccagni had got Lazio off to a great start by scoring in the sixth minute.

Torino beat Bologna 2-1 to inch further away from the relegation zone.