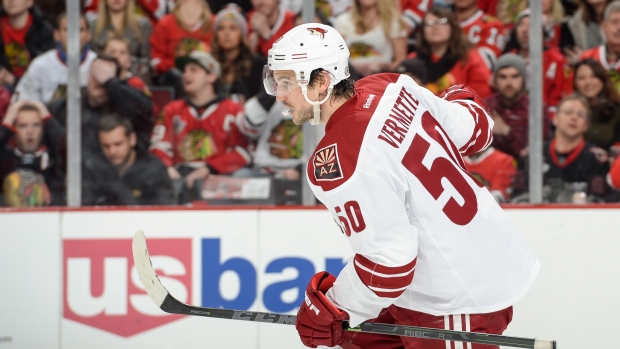 CHICAGO - The Chicago Blackhawks acquired centre Antoine Vermette from the Arizona Coyotes on Saturday night for a first-round pick this year and defensive prospect Klas Dahlbeck.

The 32-year-old Vermette will help replace Patrick Kane, the star Chicago forward who broke his left collarbone Tuesday night and will be out at least until late May.

Vermette is in position to become an unrestricted free agent after the season. He has 13 goals and 22 assists in 62 games this season. In 11 NHL seasons, Vermette has 194 goals and 236 assists in 815 regular-season games with Ottawa, Columbus and Arizona.

"Antoine is the consummate professional and a class act and we wish him the best of luck in the future," Coyotes general manager Don Maloney said in a statement.

The Coyotes have lost nine straight, falling 4-1 in Boston on Saturday night.

"I don't know what I am thinking. It's obviously a strange position, and it's not a fun one," Vermette said before the trade. "It's not the way you see it, you know as a group here. It's not the position you want to be. It's a little strange."

The 23-year-old Dahlbeck has a goal in four games for Chicago this season. The Swede has four goals and six assists in 49 games for Rockford in the American Hockey League.

Chicago acquired defenceman Kimmo Timonen from Philadelphia on Friday for a second-round draft pick this year and a conditional 2016 fourth-rounder.