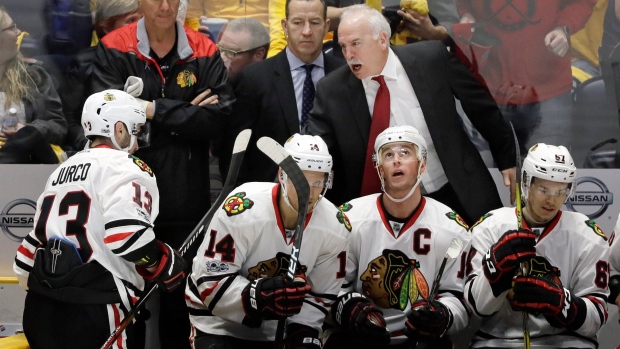 CHICAGO — The Chicago Blackhawks are not making changes behind the bench after missing the playoffs for the first time in a decade.

Team President Joe McDonough told reporters Thursday that he plans to bring back both coach Joel Quenneville and general manager Stan Bowman after a dismal season for a team that has won three Stanley Cup championships since 2010 but stumbled to a last-place finish in the Central Division this season.

"I believe in continuity, they've had an incredible body of success," McDonough told reporters. "We're not tethered to the past. This has been a very disappointing year and our expectations are incredibly high. We're not going to deviate from those expectations. But I believe both Stan and Joel are the guys that are going to bring this back."

Chicago had reached the playoffs every year since Quenneville took over four games into the 2008-09 season, winning it all in 2010, 2013 and 2015. But the Blackhawks lost in the first round each of the past two years and this year was a nightmare.

Corey Crawford's upper-body injury in December eventually sidelined the two-time All-Star goaltender for the season, and there was inconsistent play from some of the team's aging stars and young defencemen.

Still, Chicago has a highly regarded support system and the team has plenty of talent, including star forward Patrick Kane. The Blackhawks have started a youth movement as veterans like Jonathan Toews, Duncan Keith and Brent Seabrook have shown some signs of wear and tear. The team's leading goal scorer, Alex DeBrincat, is 20.

"Joel's done a very good job with the young players," McDonough told reporters. "And I think it's inspiring to see that there are a lot of good young players on the way. I know at one point, that was kind of a knock on Joel, that he wasn't proficient at coaching young players. Nothing could be further from the truth."

The 59-year-old Quenneville, a former NHL defenceman and the NHL's second-winningest coach in history, received a three-year contract extension in January 2016 that runs through the 2019-20 season. He and Bowman will now get a chance to turn things around.

"There were a lot of circumstances that happened this year that were out of our control," McDonough said. "And I'm not assessing blame, but I believe in both of them. I want both of them to succeed and I think we're going to be headed in the right direction, after a lot of reflection and assessment."