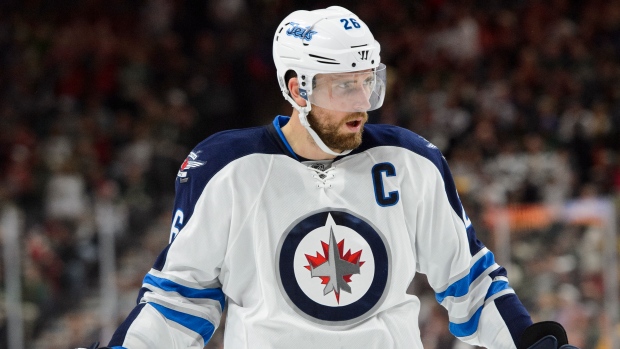 After a huge step forward in 2017-18, the Winnipeg Jets were looked at as one of the favourites to win the Stanley Cup heading into last season. But the Jets put up 15 fewer points in the regular season and were bounced in the first round of the playoffs by the St. Louis Blues. In short, it was a disappointing year in Winnipeg.

Captain Blake Wheeler admitted to TSN’s Sara Orlesky in an exclusive one-on-one sit-down interview this week that the pursuit of winning got to him and caused him to lose touch with things close to him off the ice.

“I was disappointed for the first time in myself after last year not because we didn't win the Stanley Cup. I lost touch with myself as a dad, as a husband, first and foremost, because I invested so much into trying to win. Everyone was talking about this is our year to win and I felt like we had a real opportunity to win and when I was home, that's where I was – I was trying to win the Stanley Cup,” Wheeler said.

“And when I was in the building, sometimes I was spitting nails just because I wanted to win the Stanley Cup. I was so focused on that. When it was all done and I got home, it’s like 'Man, this is almost too...' My daughter's growing up, my son's in kindergarten, none of this is that important.”

Heading into this season, Wheeler says he is going to do more not to lose sight of what’s most important to him.

“Am I hard on people compared to how I was treated as a rookie? Absolutely not. That's changed a lot. There's a lot more hand-holding and I have to put myself in people's shoes a lot more than the leaders or the older guys did for me when I was a young player,” he said.

“I think there's a recognition of that, that the players that are coming into the league now and are starting to filter into the locker rooms, it's different. You have to approach them differently. You have to sort of coddle them a little bit and if you don't, then you're too hard on them.”

Despite the way things are changing, Wheeler maintains there is still a benchmark for how players should approach things.

“I had to do it a certain way in my career to get to where I'm at. That's not going to be necessarily the same for everyone else, but there's a pretty common theme in this league [that] you've got to do a certain thing, you have to prepare a certain way if you want to be successful. So, [I] just try to show the guys what it looks like and from there, you're not holding people hands, this is the big leagues."

Wheeler has spent the past three seasons as captain of the Jets, taking over the role in 2016, the first season after Andrew Ladd was traded to the Chicago Blackhawks.

The 33-year-old posted 20 goals and matched his career-high with 91 points in 82 games. He added one goal and five points in six playoff games against the Blues.

Wheeler is entering the first season of a five-year, $41.25 million contract extension signed with the Jets last September. A first-round pick of the Arizona Coyotes in 2004, Wheeler was traded to the Atlanta Thrashers from the Boston Bruins in 2011, making the move with the franchise to Winnipeg the following season.

There were reports of a rift in the Jets locker room in early April and head coach Paul Maurice noted after the team was eliminated from the playoffs that the group had issues to sort out over the summer.

"We’ve got a few ruffled feathers in there that we're going to have to flatten out before we get going," Maurice told The Winnipeg Free Press.