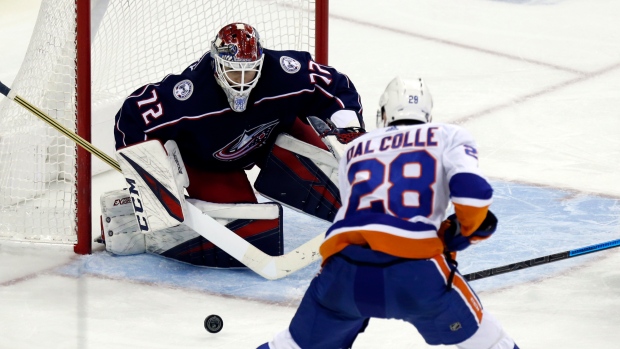 COLUMBUS, Ohio — Sergei Bobrovsky picked up his second consecutive shutout as the Columbus Blue Jackets keep scrapping to get above the Eastern Division wild-card line.

Bobrovsky was excellent again as the Blue Jackets beat the New York Islanders 4-0 on Tuesday night. With Montreal's win over Florida, Columbus remained two points behind the Canadiens for the second wild-card spot and three behind Carolina for the first.

Something will have to give on Thursday, when Montreal plays in Columbus.

Bobrovsky had 26 saves in picking up his eighth shutout of the season and 32nd of his career.

"He told me a couple weeks ago he is good mentally, he is good physically," Columbus coach John Tortorella said. "He's been good for a while now, and he's going to have to keep on being better because we have to get on his shoulders as we go through these last half dozen games."

"I don't feel the pressure," said the Russian, who will become an unrestricted free agent after the season. "One game at a time, just try to embrace it and have fun (as) the atmosphere gets more intense and the building gets more energized. It's fun to be part of."

Thomas Greiss, who had shut out Columbus twice this season, finished with 29 saves for the Islanders, who remained tied with Pittsburgh for second place in the Metropolitan Division, three behind Washington, with five left to play. They have been shut out in three of the last five games.

Ryan Dzingel, Artemi Panarin, Oliver Bjorkstrand and Cam Atkinson scored for Columbus, which salvaged a win in the last of the four-game season series between the divisional rivals.

Dzingel scored with a snipe over Greiss' head 5:43 into the game from the left circle. That came near the end of a power play brought about by the Islanders having too many men on the ice.

Panarin got his first goal in 13 games early in the second when Cam Atkinson batted at the puck in the neutral zone and pushed it behind the Islanders' defence. Panarin picked it up and beat Greiss on the breakaway.

"A couple goals I'd like to have back, but sometimes it just goes like that," Greiss said.

Bjorkstrand scored his second goal in as many games with 8:46 remaining in the game, and Atkinson added an empty-netter with 27 seconds left.

Columbus is desperate and it showed.

"It was a playoff game — plain and simple, that's what it was," Islanders coach Barry Trotz said. "The last two games we've played have been playoff games, and there's not a lot of room and you have to create it. If we had found the back of the net early there, it might have been a different story, but it wasn't. We were in it really until they got the third goal."

NOTES: New York F Andrew Ladd suffered a knee injury in Sunday's game and will miss the rest of the season and playoffs. ... New York's Tom Kuhnhackl played in his 200th career NHL game. ... Columbus F Nick Foligno returned after missing four games to be with his family. His 22-month-old son, Hudson, was seriously ill with pneumonia. ... Greiss had stopped 80 straight shots against Columbus before Dzingel's first-period goal. ... Dzingel has a three-game points streak. ... Columbus is 30-7-2 when scoring the first goal this season. ... Columbus D Scott Harrington missed a second game with an injury.

New York: At Winnipeg on Thursday.