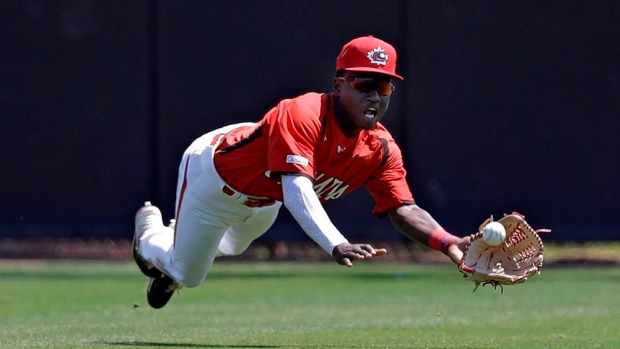 TORONTO — The decision to take the day off school was easy.

Dasan Brown’s next decision might not be as simple.

After being selected 88th overall in the third round of the 2019 MLB Draft by his hometown Toronto Blue Jays on Tuesday, a school day at Abbey Park High School in Oakville, Ont., the 17-year-old outfielder now has two choices.

One comes with an immediate payday, the other is a long-term investment in his future.

Sign with the Jays for somewhere around the $678,600 figure in place for the third-round slot and begin his professional baseball career, or honour his commitment to Texas A&M to continue his development and get some education in the NCAA ranks.

It might end up being an easy decision in the end, but both paths have their benefits.

“Obviously, it’s going to be a decision I’m going to have to make,” Brown said Tuesday, shortly after being the first Canadian to come off the board in the draft. “Right now, just looking at both my options, I want to get out and play. I want to be in a position where I can play every single game and take advantage of all the tools provided to me. It’s going to be a tough decision, but I feel like whatever decision I make will be the right one.”

If he wants to get out and play, signing with the Jays, getting on the field this summer and working with pro coaches would seem like the route.

The carrying tool when it comes to Brown is his speed, and the product of the Junior National Team program grew up a fan of former Blue Jays outfielder Rajai Davis, who’s a pretty good comparison for the type of player scouts see.

“I was a big Blue Jays fan growing up during the Rajai Davis era and he was one my favourite players back when I was a bit younger,” Brown said. “Just following the team throughout my teenage years and now having the opportunity to play for them is surreal."

“He was a runner and really good defensively and he could hit. That’s what I’m trying to model my game after as I continue to develop and progress.”

Before taking in Tuesday’s series opener at Rogers Centre between the Jays and New York Yankees, Brown spent the day at home with his father, Raynes, while his mother, Patricia, was at work.

He credits his parents for helping him get to this point, and that family support is one of the reasons Greg Hamilton, head coach and director of Baseball Canada’s national programs, believes Brown will be able to handle whatever road he decides to take.

“I think they’re both compelling options and you have to sit down, you have to weigh them out and you have to kind of figure out who you are and where your heart really lies out of high school and whether you’re ready for the option that you’re leaning towards,” Hamilton said. “I’ve always said, the right decision is a personal decision so long as you understand both options and what they mean to you and you’ve thoroughly vetted them out. He’s an intelligent kid and he’s got good family support and I think he has a pretty good idea of who he is and he’ll come to the right decision by himself.”

The Jays kept in touch with Brown for a “couple of months” leading into the draft, so it’s obvious they’re keenly interested in the skillset.

While Brown is eons away from contributing at the big-league level, it's a system that doesn’t have a whole lot of outfield depth.

His type of speed is hard to find.

“Probably the defining variable that separates him is he has plus-plus speed that plays defensively and it plays offensively,” Hamilton said. “Some guys run well, but the speed doesn’t really play in the games. For him, it plays defensively in terms of range and ability to change the game on defence, and it plays offensively in terms of his ability to steal a base, go first to third, score from second, all those types of things where speed is an element.”

Whether it’s in the SEC with the Aggies or in the lower levels of the minor leagues, how the bat develops will be the key and likely the deciding factor between making the majors and stalling at some point along the way.

“The ball jumps off his bat,” said Hamilton, who likes Brown’s quick hands and bat speed. “I don’t see him as a middle of the order guy, but I see a guy who can drive balls into gaps and stretch doubles into triples.”

Brown honed his plus speed running track for the Oakville Legion until Grade 10, clocking a 6.2-second 60-yard dash last August as proof of those 70-grade wheels.

He knows where he needs to improve.

“Defensively, I think I’m one of the best outfielders around,” Brown said. “I’m able to impact the game and change the game with my speed. My bat is going to come around. I’m not worried about the development there. A year ago or two years ago, you kind of take a look at how much it’s developed. It can only get better.”

Brown has enjoyed the ride of the draft process, as well as the day off school to see all the hard work start to pay off.

He had a hard time even remembering what he was missing.