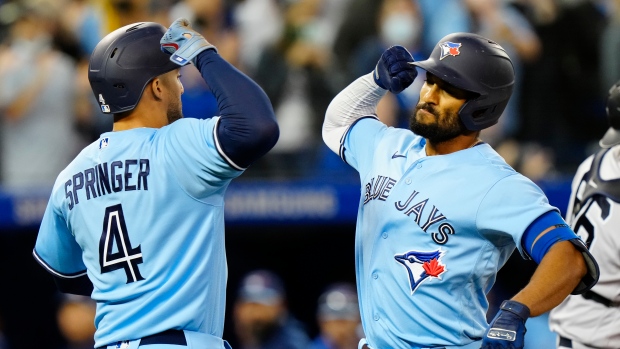 CARLSBAD, Calif. — It surprises nobody that Ross Atkins left the picturesque GM meetings host resort just outside San Diego on Thursday afternoon with the same roster holes he entered the week with.

At this early stage of the off-season, it’s all about information gathering rather than executing, and the first in-person meetings of these kind since 2019 have started to reveal the true intentions of a handful of teams.

The Cincinnati Reds and the Oakland A’s are sellers.

The Seattle Mariners and Texas Rangers are buyers.

And there seems to be a much larger group of owners willing to spend this winter compared to a year ago in the thick of the pandemic.

All of it will affect what Atkins and his Toronto Blue Jays front office is trying to do in various ways.

There’s no secret where the Jays sit: They’re win-now buyers with money to spend once again.

Rotation impact, infield reinforcements and bullpen depth are all needed between now and February.

Figuring out exactly who they are after and the tricky blueprint needed to get all that done is another story.

Atkins is playing multiple hands at a time, the same as 29 other general managers.

“It’s a matter of thinking about whether it’s more complementary or a free agent or a trade of some significant impact,” Atkins said. “We’re also in a position where we have to consider if there are ways that other teams are valuing certain areas of our club that could help us round out the team in a different way. That’s why these meetings are so helpful and so important in expediting a lot of that information for us.”

The general sense this week in California is that the top end of the free-agent market won’t have much movement until the CBA is figured out, but that doesn’t necessarily mean a handful of deals won’t happen.

There will surely be a handful of players seeking some certainty and deem an offer too good to pass up this month.

“There are always things we can act on and I wouldn’t be surprised if teams are close right now,” Atkins said Thursday before boarding a flight back to Toronto. “There are things that we could clearly push forward but still have a lot of opportunities and different things to consider where we don’t have something imminent.”

Let’s take a look at a handful of Jays talking points this week:

STAYING IN TOUCH WITH RAY, SEMIEN

It’s impossible to predict where the markets will go for the two Jays stars, but the club continues to have interest in reunions.

Many within the game believe both will escape, with Marcus Semien interested in a West Coast landing spot and Robbie Ray already being courted by the Los Angeles Angels, who absolutely need to surround Mike Trout with some quality, top-of-the-market pitching.

The tricky part for the Jays is they can’t act on another move that would rule out Semien or Ray before they figure out if bringing them back is realistic.
“A lot of it is in their hands,” Atkins said. “We’re very respectful of them getting to free agency and earning the right to explore that market, so much of it is not necessarily following their lead but being respectful of them wanting to take some time to do that. What we can do is just constantly communicate with their representation and stay in contact consistently to understand the potential of needing to go another direction while we maintain those as options.”

The Jays could go a number of ways when it comes to adding an infielder.

If Semien walks, it’s not outlandish to think they could pivot and look to the shortstop market to see if Trevor Story or Corey Seager would be willing to switch positions.

The Semien addition came out of the blue last January so it wouldn’t be smart to completely rule out those names, even if it seems unlikely.
They could also call the Oakland A’s about Matt Chapman if they want.

Atkins left the door open for a star-level addition this week, but also pointed to potentially just adding some depth to the in-house options.

“Adding another infielder either in a significant way or just to complement some of the other young infielders that we have would be a good outcome,” Atkins said. “Don’t feel like we absolutely have to, but we’d like to add another infielder to that mix.”

Even though he’s coming off a lost season thanks to a handful of nagging health issues, the Jays have by no means given up on Cavan Biggio.

While his wRC+ fell from a well above average 122 in 2020 to just 84 across 294 plate appearances this season, his versatility and lefty bat are going to help him find a role.

Exactly what that is will likely depend on the aforementioned infield addition, or additions.

“I’m really excited about Cavan Biggio next year,” Atkins said. “I feel like with the injuries he had this year and I’m just extremely optimistic we’re going to see a very good player in Cavan moving forward, not just next year.”

As of today, the Jays want Biggio to continue to work at second base, third base and the outfield, with the odd first base day thrown in, too.
They could, however, narrow that focus if other moves are made.

“We’ve talked a few times recently and he’s so openminded and willing to be flexible,” Atkins said. “Because of his ability, his athleticism, his past, he’s confident he can make the adjustment. I just told him as we learned more about our opportunities I would keep him in the loop and as he starts his work at second and/or third or both and outfield that we can come up with a plan together each step of the way, but would rather learn as much as possible before we make that decision. He’s comfortable with that.”

ROMANO NOT GUARANTEED THE NINTH

After closing out 23 games this season, Jordan Romano will without a doubt be the key piece to the bullpen next season.

But could the Jays be open to adding an established veteran closer this winter?

Atkins did not rule it out when asked if he’s seeking complementary bullpen pieces or maybe interested in shopping at the top of the market, where Raisel Iglesias and Kenley Jansen reside.

“We’re open to both and don’t feel like we have to establish a back-of-the-bullpen closer that has shown the ability to do that or has that skillset, but we’re open to that and open to that concept,” Atkins said.

“Swing-and-miss is always nice later in a game,” Atkins said. “To complement (Adam) Cimber and (Trevor) Richards, another arm that could get a strikeout late in the game would be a nice piece to have and hopefully we have a couple of those.”

Romano’s attitude towards the ninth inning is something could come into play here and using the quirky right-hander in a “most important outs” role no matter the frame might be ideal.

“The great thing about Jordan is he always tells us, ‘I just want to win,’” Atkins relayed. “So we have consistently talked to him about the potential impact, the potential role and his consistent response is, ‘I want to be a part of a winning team and whatever makes us better, I’m all in.’ It’s authentic.”

Clubs have until next Friday to add eligible players to the 40-man roster or risk losing them in next month’s Rule 5 draft.

The Jays have some interesting decisions to make on some low-level names.

Using my 2021 top 50 Jays prospects list as a guide the most important names who need to be added are infielder Miguel Hiraldo (No. 9), right-hander Joey Murray (No. 17), shortstop Leo Jimenez (No. 20) and Brazilian righty Eric Pardinho (No. 23).

Jimenez, a true shortstop, seems like the best bet.

There’s also Triple-A starters Zach Logue and Bowden Francis, who was acquired in the deal that sent Rowdy Tellez to the Milwaukee Brewers, versatile speedster Samad Taylor (No. 38) as well as interesting low-level arms like Roither Hernandez (No. 41), Naswell Paulino (No. 42) and Alejandro Melean (No. 43).

Only a couple of these names will be added to the Jays’ 40-man, but you can expect to see a flurry of minor moves league-wide next Friday.