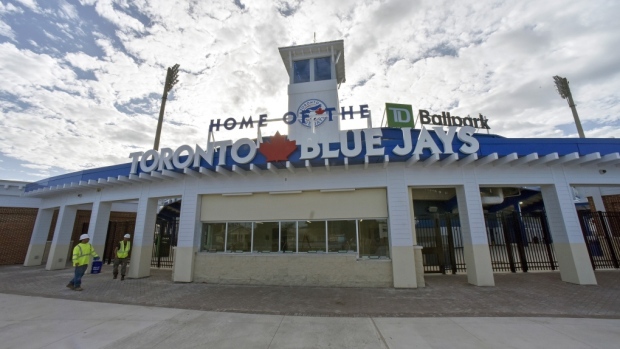 TORONTO — As Toronto Blue Jays’ brass scrambles to find a suitable and safe last-minute location for not only spring training 2.0 but regular-season games a month from now, there are players with a preference.

While this Blue Jays club is one littered with young players excited to get back on the field after a nearly four-month pause, not everyone is excited about the prospect of being shipped to a coronavirus hotspot in Dunedin, Fla.

“I think it’s smart to go to Toronto, if possible, because of the COVID-19 outbreak,” one Jays player said via text late Wednesday night, expressing concern only hours after a number of positive test results emerged from the shutdown of the team’s Dunedin training facility last week.

At this point, Blue Jays players scattered across the U.S. still haven’t been told where to report to by next Wednesday.

On Wednesday, they started hearing about Toronto as a legitimate possibility after The Associated Press reported Canadian federal health authorities are now reviewing a Major League Baseball plan for the Blue Jays to play in Toronto this summer.

Only time will tell if it’s realistic or a last-minute Hail Mary.

The Canada-U.S. border currently remains closed for non-essential travel until at least July 21, and anyone entering Canada would be subject to a mandatory 14-day quarantine.

Publicly, the Canadian government is on the record this week saying they’d be open to the idea.

The Province of Ontario would also have to sign off on any MLB restart plan, but Dr. David Williams, chief medical officer for the province, said on Tuesday that he had not seen a full plan.

“The Major League Baseball proposal, I’ve seen it and read it,” Williams said. “It deals with a lot of aspects there. It doesn’t mention anything about travel to Canada at this time, so if there was some interest in that we’d have to get a proposal from them to see how they would undertake the uniqueness of bringing the team and if they’ve thought about bringing other teams [to Toronto], how they would work with that up until such time the federal government reduces or eliminates their quarantine law. But that’s still in place at this time. We have ways that we worked with the NHL to consider that. I have not seen anything specific with Major League Baseball yet at this time.”

If the Jays can’t get an exemption in time, the plan all along has been to set up shop at their Dunedin facility, but the rising number of COVID-19 cases in the state of Florida has thrown a huge wrench into those plans.

The positive tests Wednesday, although expected across baseball, did not help.

The Jays have done work to improve field lighting in order to bring it up to MLB night game standards, as well as attempted to reconfigure things such as clubhouse spacing for social distancing purposes.

Logistically, it’s the easiest location to train and play exhibition games over the next month, but the virus is worrisome considering players will essentially be travelling back and forth from the stadium on a daily basis with no bubble or quarantine concept in place like other sports.

The league can also relocate teams on its own, either to neutral sites or other MLB ballparks, which has led to some talk of Tropicana Field being used.

If Florida is deemed to be too dangerous, Buffalo’s Sahlen Field is a fallback plan, giving the Jays a facility in a relatively virus-free spot, and one that’s also a stone’s throw from Toronto if and when something changes.

In the agreement between the league and the MLBPA earlier this week, it was also outlined that players on the taxi squad would be kept at an alternate site a safe distance away, which could be Buffalo if the big-league club does end up in Toronto.

The hurdle might not be getting the Blue Jays into Canada to train, since they could conceivably quarantine themselves to an extent inside Rogers Centre and the attached hotel.

But what about visiting teams during the regular season?

What about any sort of exhibition games prior to the schedule July 24 regular-season opener?

The Jays and MLB will have to prove players and staff won’t be a risk, especially as the city starts to open up, because everyone knows Toronto is a destination spot for many athletes on road trips.

With the clock ticking, those are the questions politicians are working through and the club is expecting to have a better idea by the end of the week.