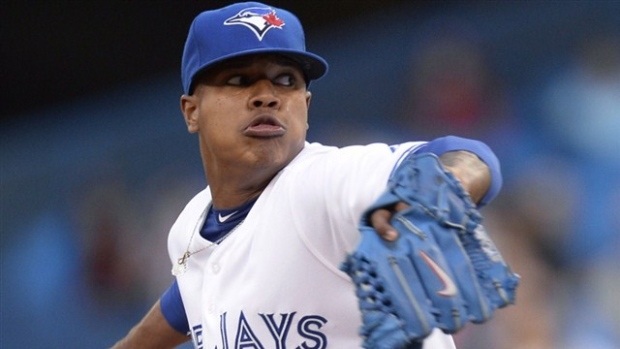 The New York Yankees will try to maintain their dominance of the AL East-rival Toronto Blue Jays when the two clubs open a three-game series tonight.

The Yankees swept the Blue Jays in three games in the Bronx last week and are 5-1 so far in the season series. The Yankees, who went 14-5 in this rivalry last season, are tied with Baltimore at 1 1/2 games behind the Blue Jays for the AL East lead.

Toronto lost two of three in Cincinnati this weekend and went 3-7 on a recent road trip against the Orioles, Yankees and Reds.

Edwin Encarnacion hit his 24th home run and Colby Rasmus ended with two hits and two RBI for Toronto, which is 4-11 in the last 15 games. Melky Cabrera finished 2-for-4 with a run scored in the loss.

"You get what you deserve, and that's what we got on this road trip," Blue Jays manager John Gibbons said.

Toronto is back home for the next nine games versus New York, Chicago (White Sox) and Milwaukee, and has a 20-17 ledger at Rogers Centre. Blue Jays slugger Jose Bautista is day-to-day with tightness in his left leg and is scheduled to undergo an MRI. He suffered the issue Sunday and is batting .305 with 15 homers and 49 RBI this season.

"I don't feel too bad but I really want to see what the MRI says before I can answer a question like that," Bautista said when asked if the injury could be long-term or just needs a few days rest. "I might not feel too bad, but the MRI might show some inflammation or irritation.

"I don't even know what it could show, and the fact that I could make it worse it might be better to sit out for a couple of days or so and let it calm down. The most important thing is seeing the MRI tomorrow, because I don't feel terrible but I know there's something going on."

Marcus Stroman draws the start for Toronto Monday and he is 3-2 with a 5.14 ERA. Stroman has lost back-to-back trips to the hill and gave up two runs across 3 2/3 innings of a 3-1 loss at the Yankees last Tuesday.

Stroman has made nine appearances (4 starts) this season and the right-hander is 2-1 in six games (3 starts) at home.

New York lost two of three matchups with the Orioles over the weekend at Yankee Stadium and dropped an 8-0 decision on Sunday. Yankees starter Masahiro Tanaka suffered just his second loss of the season (11-2) and was reached for three runs and six hits in seven innings. He struck out six and walked one.

"He's not going to be perfect," Yankees manager Joe Girardi said of Tanaka.

Ichiro Suzuki had two of New York's four hits and Mark Teixeira was 0-for-3 after hitting safely in a season-high 10 straight games. The Yankees, who were outscored 14-1 in the last two games versus Baltimore, are still a solid 8-4 in the previous 12 games.

The Yankees are 22-17 on the road and will send Chase Whitley to the mound Monday for the eighth start of his career. He is 3-0 with a 2.56 earned run average and threw five innings of two-run ball in a 7-3 win over the Jays last Wednesday. The triumph is part of a 16-game winning streak at home versus the Blue Jays.

Whitley, a right-hander, is 2-0 in five road appearances.