With more than a month of the hockey calendar down, we’re starting to get an understanding of how each team and head coach thinks about their bluelines.

I’m always fascinated by how coaches manoeuvre through talent availability and the workload of their star defenders. There was no better example of this than the dichotomy of deployment in last year’s final four.

Anaheim and Nashville had (and still have) two of the more balanced and well-rounded defensive units, which afforded their coaching staffs the luxury of being able to play virtually every player in every situation. Ottawa was in a different bucket – they had undoubtedly the league’s best blueliner, but didn’t have much depth behind him. Alas, Erik Karlsson wound up playing a ton of minutes, and head coach Guy Boucher managed his second and third-pairing groups with much more care.

For those teams, the breakouts of ice time made a lot of sense. But it’s not always that easy. A bunch of teams are still searching for optimal deployment – the ideal see-saw that sees better players playing more minutes, but only to the point where fatigue won’t put overall team performance in jeopardy. Another group of teams are still trying to figure out how to protect or insulate their weaker pairings further down the lineup. And a few teams are still trying to figure out who really is the team’s most capable defender.

I thought it would be interesting at this point in the season to look at the deployment of every single team’s blueline by conference. The below analysis tries to answer the following questions:

1. How are teams smoothing ice time? Which teams are running top-heavy, and which teams have smoothed minutes across the lineup?
2. Does the deployment make sense? Are the players getting more ice time delivering the requisite results? If not, how could the team reconfigure the lineup?

Let’s start with the Eastern Conference. From left to right: a table of 5-on-5 ice-time leaders by team, the percentage of minutes defenders are playing relative to the team’s “star”, and a Corsi% breakout by player. 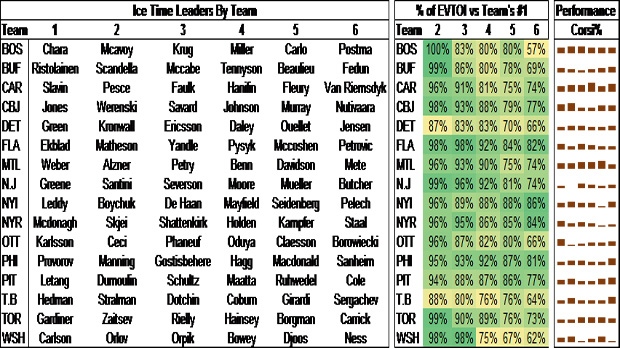 The East is bifurcated pretty well here. The two glaringly obvious top-heavy teams include Detroit and Tampa Bay – the Red Wings ultra-reliant on Mike Green, and the Lightning the same with Victor Hedman. What’s interesting is that Ottawa isn’t in this group. While they’re definitely more top-heavy than most teams, it’s interesting to note that the split between Karlsson and Cody Ceci isn’t that far off. Whether that’s because Karlsson is easing back from injury, or because the team has more confidence in Ceci (or both), remains to be seen.

Three teams smooth out their ice time pretty dramatically: the Islanders, Rangers, and Flyers. None of those teams are particularly surprising. Where they don’t have the superstar defender, they make up for in having decent depth down the lineup. It is notable though that a few established names – Kevin Shattenkirk in New York, and Shayne Gostisbehere/Andrew MacDonald in Philadelphia – are actually running pretty far down the lineup. Shattenkirk in particular is interesting because of the sizable investment the Rangers made in him this past off-season. To see him cede some ice to the likes of veteran Ryan McDonagh and the younger Brady Skjei suggests to me that head coach Alain Vigneault knows who his “star” pairing is, and it doesn’t include Shattenkirk.

The performance numbers are eye-popping for a few teams. I particularly enjoy Carolina, who can pretty much play any defender at any time and know they’re going to win the shot battle. The Hurricanes have one of the deepest and most talented bluelines, and the fact that this group is one of the youngest in the league has to scare everyone else in the East.

I’d be remiss to not point out that a couple of other teams are “performing by committee” right now – that includes two Canadian teams in Toronto and Montreal. For the Leafs, this makes a lot of sense. What they lack in a superstar defender they make up for in depth and versatility. And head coach Mike Babcock is notorious for rolling four lines and three pairs. What you end up with is any pairing is a possibility to play with any line at any time, and the results are generally similar.

For Montreal, it’s less clear to me. Shea Weber has been solid for the Canadiens, but he’s still a shell of what he was in his prime. At his age and mileage, the Canadiens coaching staff is in a weird place where they need to rely on him perhaps more than they should. The good news is that some of the newer names have also performed reasonably well – so long as the coaching staff gets comfortable with the idea, we could start to see a decent shift in ice-time allocation coming here. 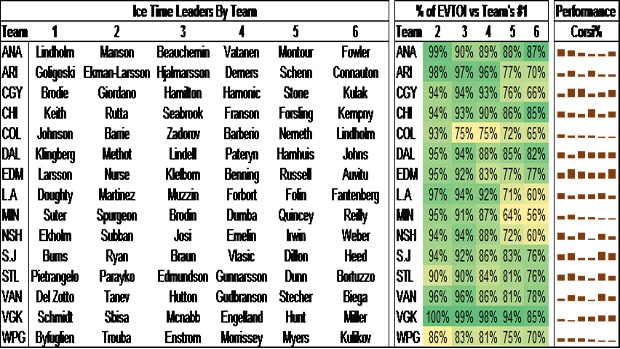 Colorado is redefining top-heavy deployment. Such is life when you only have two reliable and established defenders in Erik Johnson and Tyson Barrie. The Avs really need two or three more bodies behind their first pair, and right now there’s just little else to offer.

On the other side, the West has a ton of teams who are rolling two or three pairings pretty equally. Arizona, Calgary, Chicago, Los Angeles, and Nashville all play their top four about the same at 5-on-5. The Kings are interesting here because they notoriously buried Drew Doughty with excessive minutes during the Darryl Sutter era. A new regime has meant more Alec Martinez, more Jake Muzzin, and more Derek Forbort. It’s hard to say right now whether that’s a superior strategy, but the Kings certainly look like a lot more dangerous team in 2017-18. Something to file away and revisit for an analysis at the end of the year, for sure.

My favourite team on this list though has to be Vegas. The Golden Knights have the most balanced deployment in the league by a fair margin (though Anaheim is reasonably close), and again, it’s probably borne out of the fact that they have offset a lack of star power with an expansion draft strategy of getting as many NHL blueline bodies as possible on the roster.

Performance wise, I think Vancouver has the biggest opportunity to reconfigure here. Michael Del Zotto’s a fine player but if he’s anchoring your entire unit, it’s probably an issue. The results just haven’t been there and he’s been considerably outplayed by the likes of Chris Tanev and Ben Hutton behind him. The same is true for Erik Gudbranson, a defensive defenceman who is fighting off younger players that appear ready for some extra shifts each night.

A first-year coach like Travis Green is always going to need a bit more time to figure out his lineup – I noted just last week that I expected similar tweaking for his power-play units in the coming weeks. For a guy who wasn’t exactly armed with a ton of talent, he’s really off to a great start. But I expect the Canucks lineup to continue to evolve over the course of the season, and that’s definitely true for the defensive units.