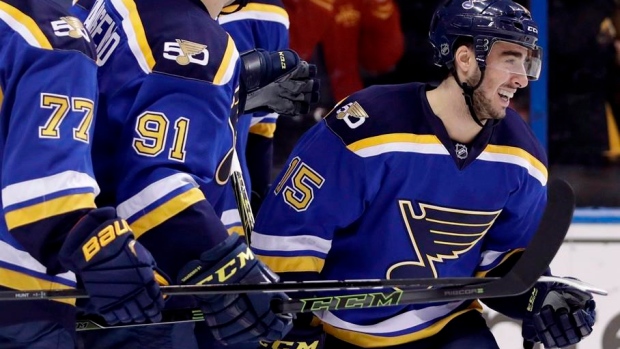 TORONTO — Robby Fabbri takes a few quick strides before pinging a shot in off the post. The sequence comes not long after he accelerates past an opponent for a breakaway.

In between, the St. Louis Blues winger makes skillful passes and provides a couple of strong backchecks.

It might have only been late-August hockey with a smattering of NHLers, but for Fabbri, it was another step on his road back to the NHL.

"I've had a long, long summer of training," he said.

It's actually been a lot longer than that.

Fabbri will have been on the shelf for exactly 20 months thanks to consecutive tears to the anterior cruciate ligament in his left knee when St. Louis opens its regular season on Oct. 4.

The 22-year-old from Mississauga, Ont., was initially hurt in a game against Pittsburgh following a hit along the boards in February 2017. Fabbri underwent surgery and was at training camp last September, but re-injured the same joint without taking any contact and missed the entire 2017-18 season.

"Watching for a year and a half gets kind of tiring, kind of old. You want to be out there," Fabbri said this week at the conclusion of the BioSteel Camp. "The rehab process takes up a lot of your day, so it was nice like that.

"To be able to spend time with my family helped me stay up, stay positive."

Fabbri followed that up with 11 goals and 18 assists in 51 games in 2016-17, only to see his campaign abruptly cut short Feb. 4 by the devastating knee injury that left him writhing in pain on the ice.

He worked hard to return to the lineup for camp the following September and thought he was in the clear when disaster struck a second time.

"The (worst moment) might have been right when it happened, knowing I had to go through what I just did for seven months all over again," Fabbri recalled. "But once you get started doing it there's no looking back. I just had the same mindset I had the first time, wanting to come back better, faster and stronger."

"I'm a relatively happy person," the five-foot-10, 190-pound Fabri continued. "You look at it as a positive. No one really gets 20 months to train for one season. I used that as a chance to fix all the little things in my body, aside from the knee, and really get prepared for the year."

Fabbri might be back physically, but he hasn't been given any guarantees by the Blues heading into camp after signing what amounts to a "show-me contract" worth US$925,000 for one year.

"They're going to give me the chances and see what I bring to the table," he said. "The rest is up to me."

Dallas Stars centre Tyler Seguin, who is another BioSteel athlete and picked Fabbri to be on his team for the camp's final-day tournament, said he's been impressed training alongside the Blues forward.

"I've seen him play before, I've played against him, obviously I know the story," Seguin said. "But really getting to meet the person this summer, it's no surprise how far he's come. He's a very determined guy. He's a guy that I've never not seen smiling or laughing or having a good time.

"I know he's a good teammate for the guys in St. Louis, and I wouldn't be surprised if he had a heck of a year."

And that team will have a significantly new look this season after the Blues acquired Ryan O'Reilly in blockbuster a trade with Buffalo on July 1, hours after signing free-agent centre Tyler Bozak from Toronto.

O'Reilly and Fabbri played together on Seguin's title-winning team at the BioSteel 4-on-4 tournament, connecting on a number of chances as the pair seemed to be building some early chemistry.

"He's a great guy and an even better player," Fabbri said of O'Reilly. "Everyone's so excited in St. Louis — the fans, the organization — with everyone we've brought in.

But probably no one more so than Fabbri after his agonizing 20 months on the sidelines.

"This is not the ideal situation," he said. "You've really got to dig deep and see who you are and really work through the adversity."