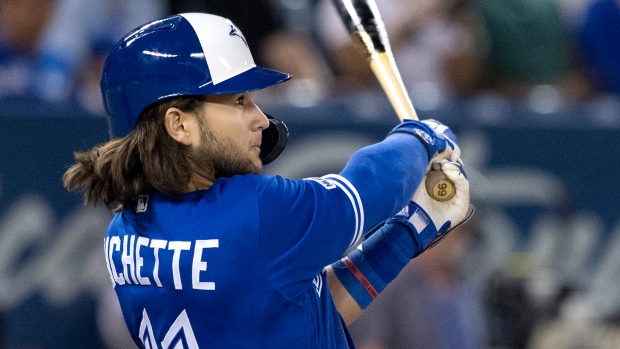 DUNEDIN, Fla. — There aren’t many settings where you’ll find an uncomfortable Bo Bichette.

Still three weeks away from his 22nd birthday and with just 46 major-league games under his belt, the Toronto Blue Jays shortstop stood in the front of the media Saturday and played a role he’s been trending towards since the day he arrived in the big leagues last July: Calm, cool, collected, confident, and candid future superstar.

The next generation of baseball needs opinionated voices and Bichette looks to be well on his way to being a player who won’t shy away from sensitive topics or fill up dead air with overused cliches.

The desire to be great on the field is obvious.

His ability to speak his mind in a thoughtful, intelligent way is only going to enhance the God-given baseball ability the right-handed hitting shortstop possesses.

The hair helps, too. The Jays’ marketing team has it easy with this one.

Bichette took on the modest outside expectations for his ballclub first.

Could they push 80 if everything broke right?

The product of Lakewood High School in nearby St. Petersburg wasn’t having it, repeating essentially what he’s been saying since last September.

“I expect us to compete,” Bichette said to lead off the scrum at TD Ballpark. “I expect us to do really well. We have a lot more talent than people realize. I don't think people are taking into account that some of our guys are going to take steps forward and become really impact players.”

That’s exactly what needs to happen, too.

Bichette and Vladimir Guerrero Jr. absolutely need to make the jump from highly-regarded prospects with flashes of greatness in their debuts to elite bats that threaten even the best arms in baseball and give the Jays a two-star core that will be the envy of other franchises.

There are many other pieces that matter and variables to consider, but if the aforementioned doesn’t happen it’s going to be a much longer road to becoming the sustainable powerhouse that president Mark Shapiro and GM Ross Atkins envision.

It’s up for debate which player will end up being better, but Bichette, along with double-play partner Cavan Biggio, is going to be the face and voice Blue Jays fans will see and hear most.

He proved that Saturday morning when he tackled the subject of the Houston Astros’ cheating with a certain veteran savvy that comes with the MLB bloodline passed down from Dante.

The punishments weren’t enough in his mind, either.

“I think the way it was handled is probably bad for the game, the fact that those guys aren't getting in trouble, per se,” Bichette said. “I'm glad (Dodgers’ Cody) Bellinger stepped up and said something. I think more guys in his position need to. But like I said, I think it's more the punishment that's bad for the game and not necessarily what happened.

“The cheating is the cheating, people are going to do it. It happens in football. But when there are no consequences for it, that’s probably a problem. People do things they regret. But when you get away with it, it just becomes a bit bigger than it is. We’ll move on from it, but it’s a tough pill to swallow.”

Ask Blue Jays hitting coach Guillermo Martinez about how he’s helping Bichette take the next step and he smiles.

Even though there will be times adjustments will be needed and slumps will be deep, Bichette is simply gifted with the bat in his hands, using an innate ability to position his body through his swing and get the barrel on the ball.

Martinez uses a Josh Donaldson comparison regularly. He’s a student of hitting and is able to do things his own unique way.

There were no massive adjustments or areas of focus for Bichette this winter.

Bichette knows consistency is the separator between good and great.

While the Blue Jays front office is busy mapping out a load management plan to keep Guerrero Jr. healthy, there’s no such plan with Bichette.

He’s the true definition of an everyday player.

If you’re showing up to the ballpark, the only way Bichette won’t be in the lineup is if he’s hurt or you’re unlucky enough to pick one of the rare days when manager Charlie Montoyo decides he needs a rest.

Those will be few and far between, evidenced by the fact the club feels like it can get by carrying Brandon Drury as the lone backup option, rather than find a versatile natural shortstop to back up Bichette.

“I don't think there's no way you can do any better than what he did,” Montoyo said. “We had a funny conversation there at the end (of the season) when we were talking to all of the players for their offseason plans and stuff, and he was the one we told, ‘Do the same thing you did last year. Just work on your defence, on your hitting, don't change anything,’ because nobody can play as good as he did.”