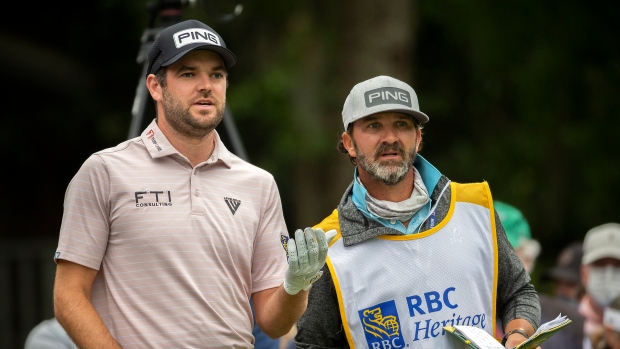 There’s something about the second round at the RBC Heritage that appeals to Corey Conners.

Last year, he posted his PGA Tour career low in round two, a 63. On Friday, he shot 64, that remarkable score coming with a double-bogey on his card. He walked off the course as the clubhouse leader at 11 under.

“Really happy with the round,” said Conners. “Hit my irons really well and was able to roll in some putts. That was nice, to get a few extra on the second nine I played today, on the front side here. Feel good about the game and really happy about the day.”

The Listowel, Ont., product drove the ball well, hitting 11 of 14 fairways, five more than in his opening round. He also found the green on 14 of 18 attempts. But it was his putting that propelled his day as he dropped more than 90 feet of putts. He picked up 4.219 strokes on the early draw of the field with his flatstick.

“Trying to keep things quick on the greens,” Conners said of his routine. “There are a lot of subtle breaks here, but trying to putt with confidence and trust and be quick with my routine. Feel like I'm seeing the lines pretty well, and very happy with how I'm rolling it.”

On his first nine, Conners made three birdies converting putts of seven, 10 and 11 feet. But on the par-3 14th hole, his tee shot found the water resulting in a double bogey.

On his second nine – the front side of the Harbour Town Golf Links – he caught fire, making six birdies including one on the par-3 fourth hole where he drained a 35-foot putt.

The round continued a run of great play from Conners, who has finished inside the top 15 in four of his last five starts. Last week he tied for eighth at the Masters.

“Definitely brought a lot of confidence from the last little while,” said Conners. “I've been playing really well and just trust my game and play with the confidence that I have and good things are going to happen. So, hopefully keep that up for a few more days, but definitely feel like I'm in control.”

Always known as a great ball-striker, Conners is currently seventh in driving accuracy and 10th in greens in regulation on the PGA Tour. His Achilles’ heel has always been his putting. But a grip change, lots of hard work and some help reading the breaks from caddie Danny Sahl has led to a marked improvement on the greens. Last year he was 181st in Strokes Gained: Putting; so far this year, he sits 74th in that category.

Seeing the putts go in has lessened the frustration of not being able to finish out holes and it’s given him a huge shot of confidence. It adds up to this being as well as he’s played since joining the PGA Tour.

“Feel like I'm hitting my lines really well off the tee with irons and on the greens, so, yeah, I would say this is as well as I've felt about everything for sure.”

Conners has not had a tremendous amount of success at the RBC Heritage. He finished tied for 21st last year but missed the cut in three other appearances. Two more solid rounds could change all that.