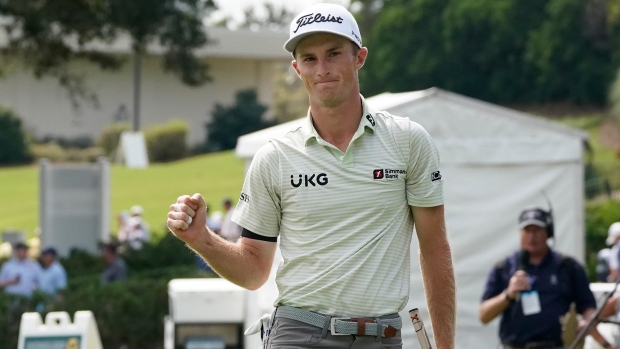 The PGA Tour heads to San Diego for a stop at the two courses at Torrey Pines – the North and the South.

The best golfers in the world made two stops here last year, one for this tournament and the other for the U.S. Open.

The courses are difficult and long but without any gimmicks.

There are 48 of the top 100 players in the world teeing it up this week, as well as seven Canadians – two of which, Jared du Toit and Max Sear, made it through Monday qualifying.

Here are my picks to contend for the win this week.

Picking Rahm this week is like getting the free space on the bingo card. He’s going to be on just about everybody’s lineup, mostly due to his past record here. He won the U.S. Open at Torrey Pines last year and won the Farmers Insurance Open in 2017, picking up his first PGA Tour win. His last three starts in this tournament have produced finishes of a tie for fifth, second and a tie for seventh. And unlike last week, this event won’t be a putting contest.

Finished tied for seventh here a year ago at eight under and that’s no surprise on a course that requires some good play off the tee. He currently ranks 23rd in Strokes Gained: off the tee and seventh in Strokes Gained: Approach the Green. Coming off a solid week at the American Express that included a sizzling 61 on the Nicklaus Tournament Course in the second round.

The big Aussie had his name engraved on the trophy here in 2020. He’s put together a good resume here overall, with five top-10 finishes in 13 starts. Last year, he finished tied for 18th here. He’s coming into the week showing some good form with three top six-finishes this season. He’s also currently in 12th in Strokes Gained: Putting as well as eighth in Strokes Gained: Total. Those are two good indicators that his game is solid right now.

Palmer tied with Finau in second place a year ago, the second time in the last four years he’s been the runner-up in this tournament. During that stretch, his average score is nine under. His last start was a tie for 12th at the Sony Open where he was third in Strokes Gained: Off the Tee. That’s a stat that he’d welcome at Torrey Pines.

The Italian has been almost missing in action for the last couple of seasons, logging just 24 tournaments worldwide over the last two seasons. But recent form suggests he’s worth a look. He finished tied for sixth last week at the American Express where he finished the week tied for 11th in Strokes Gained: Total. In his two visits to Torrey Pines last year, he was tied for 13th at the Farmers Insurance Open and tied for 10th at the U.S. Open.

Sneds seems to be back on his game after a difficult 2021 during which he lost both his parents. He tied for 14th last week, leading the field in driving accuracy. He’s played some good rounds so far this season but has yet to string four together. This might be a place for that to happen. He’s won the tournament twice, the last time in 2016 and he has eight top-10 finishes in his 15 starts, including a tie for third two years ago.