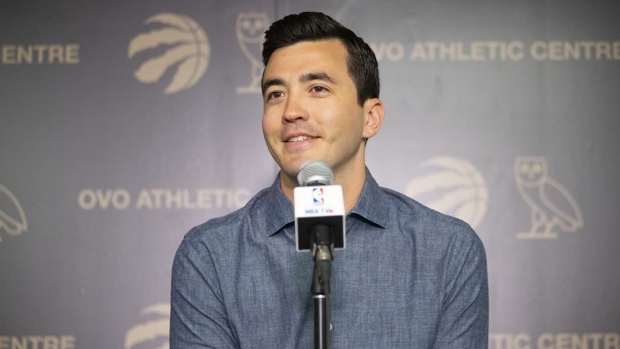 The Raptors don’t have a first-round pick this year, having included it in the trade that sent point guard Goran Dragic to the San Antonio Spurs at the deadline in February.

As such, the Raptors have turned their attention to the options available with their second-round pick (33rd overall).

Webster said the Raptors are looking for a versatile, defensive-minded player, with shot-making ability considered a bonus.

Webster: "Historically, I think about 20 of the 60 in a draft become real players."

He estimates that the success rate at the range the Raptors are drafting in (33rd overall) is "3 out of 10 make it."

The Raptors conducted 12 six-man workouts in Toronto ahead of the draft. None of those players were invited back for a follow-up workout.

The Raptors wrapped up their pre-draft workouts late last week. They conducted 12 6-man workouts in Toronto, per Bobby Webster, so they auditioned 72 prospects. Nobody was invited back for a 2nd workout.

The Raptors aren’t banking on coming away with an impact player.

“Historically, I think about 20 of 60 in a draft become real players,” Webster said.

Webster estimated the success rate at where the Raptors are picking is that “three out of 10 make it.”

Raptors GM Bobby Webster declined to comment specifically on reports of OG Anunoby being dissatisfied with his role/trade speculation: "We have great communication with OG... I don't think it's all that noteworthy."

Aside from the draft, Webster declined to comment on reports that forward OG Anunoby has grown disgruntled with his role in Toronto.

The 24-year-old, who was in Toronto and working out at the team's facility Tuesday, averaged a career-high 17.1 points and 5.5 rebounds per game last season.

“We have great communication with OG. … I don’t think it’s all that noteworthy,” Webster said.

The Orlando Magic hold the first-overall pick in the draft.

Watch the NBA Draft LIVE on TSN2/4, TSN Direct and the TSN App beginning at 7:30 p.m. ET on Thursday.