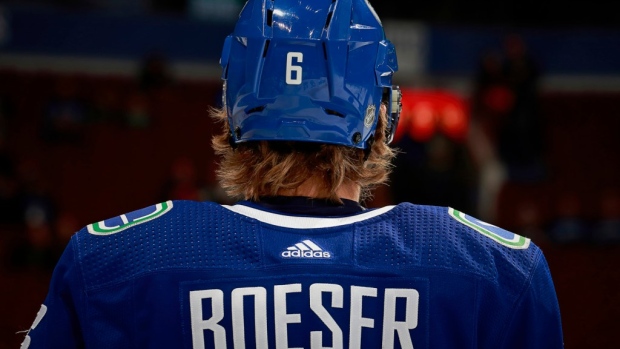 Even with the sky-high expectations, the 20-year-old defenceman often left onlookers gasping with his dazzling puck movement and scoring prowess.

He frustrated opponents, led all first-year players in scoring with 53 points (eight goals, 45 assists), and is a finalist for the NHL's rookie of the year award.

There were some challenges in transitioning from playing at the University of Michigan to the biggest league in the world, but Hughes believes he was "over prepared" for the jump.

"I was probably overripe and really ready to go in," he told reporters Thursday.

"Obviously I think I had a good year. And I think our team had a really good year."

Though the squad is stacked with young talent, few believed the Canucks would make a deep playoff run this season.

Vancouver defied the odds, muscling its way into the playoffs with a qualification-round win over the Minnesota Wild, then ousting the reigning Stanley Cup champion St. Louis Blues in the first round. The journey ended with a tough Game 7 loss to the Vegas Golden Knights in the Western Conference semifinals in Edmonton.

The experience gave the young group a new sense of confidence, Hughes said.

"Expectations will probably be even higher going into next season after what we just did," he said. "I like that. I think we have a confident group and I think we’re all really excited for next year."

Playing summer hockey in a bubble during a global pandemic was unusual, but it was also enlightening for the Canucks, said right-winger Brock Boeser.

After getting so close to the conference finals, the 23-year-old forward believes Vancouver has what it takes to win a Stanley Cup in the next few years.

Boeser hopes to stick with Vancouver despite a flurry of recent trade rumours.

"I don't think I'm going to get traded. Obviously rumours are going to happen and stuff’s going to be out in the media," he said. "But I love Vancouver, I love the guys I play with, I love the organization and the fans. I want to be a Canuck."

Boeser acknowledged he has to work on his game. After putting up 56 points in his sophomore campaign in 2018-19, he was limited to 45 (16 goals, 29 assists) in the regular season this year. Boeser added another 11 points (four goals, seven assists) in 17 post-season games.

The six-foot-one, 208-pound forward already knows what he'll be working on next season.

"I have to make sure I come into next season shooting the puck a lot because I think that creates a lot for me and my linemates," he said.

Hughes also has a plan for improving this summer. Currently staying in Michigan with his family — including his younger brother Jack, last year's No. 1 overall draft pick by New Jersey — the young defenceman wants to improve every aspect of his game.

"I'm going to try to get stronger and just get better at everything that I do — skating, shot, skills, anything I can," he said.

This report by The Canadian Press was first published Sept. 17, 2020.